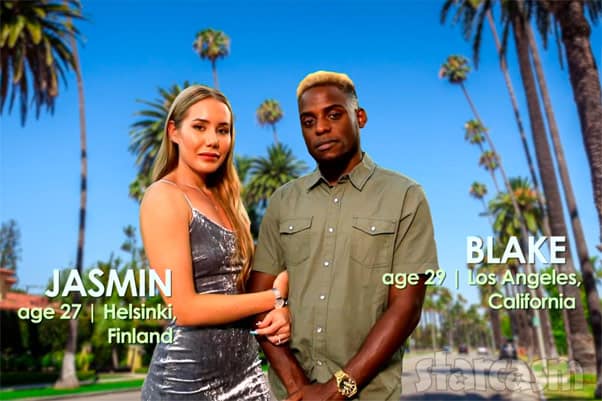 90 Day Fiance masked rapper Blake Abelard and his former Finnish fiancée Jasmin Lahtinen have been quite open on social media about the fact that they are still together — which, as fans of the show are well aware, means that they did eventually get married. We haven’t really covered Blake and Jasmin much on the site this season, so I thought I might do a bit of a catch-up post, which includes a wedding photo and more proof. Plus, we’ve got information about Blake’s ex-wife as well as a restraining order application filed against him in 2015?!

Starting with the couple’s nuptials, Blake and Jasmin were married in California in early October. 90 Day Fiance tea magnet @FraudedByTLC was tipped off about a wedding photo posted by one of Blake’s music business pals, and she shared it back on November 15.

Here’s the photo, in which you can see Blake the groom with his smiling (***GASP***) bouquet-holding bride Jasmin, along with a collection of folks that were obviously sitting on Blake’s side of the aisle: 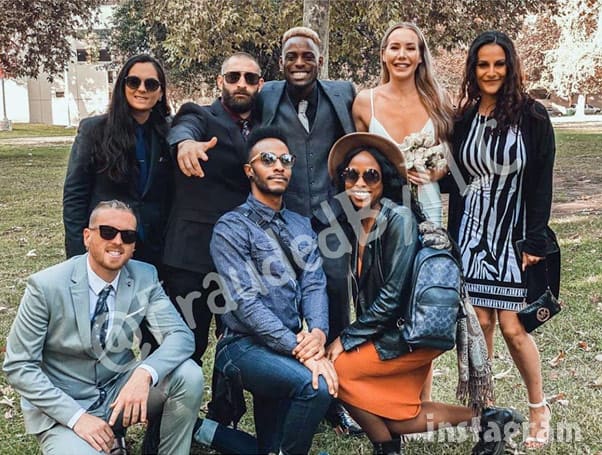 The photo 99% confirmed that Blake and Jasmin did get married, but that percentage went up one more tick after Soap Dirt obtained a copy of the couple’s marriage certificate. The certificate image posted by the site is partially redacted and doesn’t include the actual wedding date, and the post doesn’t mention it either. So we’re still working with the “early October” date based on the wedding photo above, as well as another couple images from the wedding that I found online which did not include Blake or Jasmin.

During his 90 Day Fiance introduction, Blake revealed on camera that he was previously married at 19 and divorced at 23. “After my divorce, it was really hard to find love again,” Blake revealed. He said that his friends convinced him to download a dating app and “within like a day” he connected with Jasmin.

So, what’s the scoop on Blake’s first wife and divorce? Blake’s age timeline seems accurate as he was married in 2010 and his divorce was finalized in August of 2014. Interestingly, Soap Dirt reveals that Blake’s first wife was also from another country. She was originally born in Israel and came to the United States in 2010 — the same year she married Blake. It’s unclear if she came to the US on a K-1 visa or not.

UPDATE – Blake has responded to Soap Dirt’s article by stating their information about the timing of his ex-wife’s arrival in the US was a bit off. He says that the two of them went to high school together. “I graduated in 2007 so her coming in 2010 is IMPOSSIBLE” he says, adding that they were in the same graduating class. Obviously, this would also mean that his ex-wife did not come to the US on a K-1 visa.

Blake mentions on the show that he and his wife divorced due to them taking different career paths. That appears to be accurate as well. Blake was pursuing his dream of being a masked rapper who co-owned a teeny, tiny record label while living with his parents. Meanwhile, his wife wanted to become a lawyer. They both got what they wanted.

Blake’s ex-wife entered law school the same year she divorced Blake, and she received her degree in 2017. This was after she graduated magna cvm laude from California State University Northridge with a degree in Sociology.

While in law school, she served as a Judicial Extern in Buenos Aires, Argentina, as well as a Certified Law Clerk at the Los Angeles District Attorney’s Office.

Currently, she is an Associate Attorney in the Personal Injury and Employment Law Department of a California law firm. In other words, she is pretty much kicking a** and taking names!

While looking into Blake’s divorce, I ran across a few other court cases he is named in. In addition to multiple personal injury cases involving motor vehicles (two listing Blake and his mother as defendant, and another listing him as a plaintiff), there is also an entry for a protective order application taken out against Blake!

A woman filed for a temporary restraining order against Blake in October of 2015. There was a hearing in regards to the petition the following month with evidence provided by both parties and the restraining order was denied. I do not have a copy of the actual filing, so I do not know what the woman’s relationship was with Blake. She appears to currently be in her late 20s, so that would make them roughly the same age.

Another thing about Blake and Jasmin that I feel I should mention is that there appears to be a lot of manipulation by producers as far as what we’ve seen of their story on screen. Going by the evidence on social media, it’s clear that Jasmin made multiple trips to the United States after she started dating Blake, so it seems a little ridiculous to think that she was really meeting all of his friends and family for the first time when she made the trip with her K-1 visa.

@FraudedByTLC has sources telling her there is more frauding going on as well:

Although there is no real evidence to back it up, I feel pretty confident that producers also had a heavy hand in setting up the whole “misunderstanding” with Blake’s parents about where Blake and Jasmin were going to stay until they were married. I guess I can sort of believe that the parents of a divorced 29-year-old hip hop musician wouldn’t want him living with his fiancée under their roof until they were legally married, but the notion that there was a genuine miscommunication about it seems silly — especially given how fond the show producers are about cultural differences in regards to premarital boom boom.

To see how Blake and Jasmin’s inevitable walk down the aisle plays out on screen, be sure to keep tuning in for new episodes of 90 Day Fiance airing Sunday nights at 8/7c on TLC!

90 DAY FIANCE Josh’s ex-wife on his violent past, assault arrest