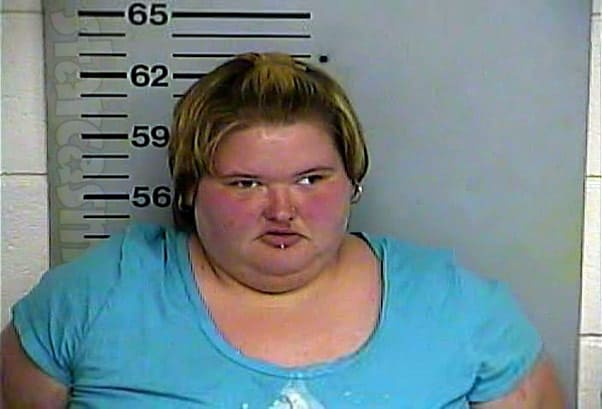 1,000-Lb Sisters star Amy Slaton has been a successful YouTuber for years now, and she has been quite open on her channel about most every aspect of her personal life and her past. So, when a mug shot photo surfaced online from her 2010 theft arrest, Amy made a video explaining exactly what happened.

“This is a story about when I was arrested,” Amy says in a video published in February of 2017 (included below). “Yes, this is age-restricted because I do not want little kids to go out and think it’s OK to steal and get in trouble and stuff like that,” Amy warns. “I do not want that to happen! Please do not do the dumb things that I done in life. You know, I did stupid things when I was younger.”

After her introductory warning, Amy moves on to sharing actual details about the arrest.

It was 2010. I had a job, but I had recently quit my job. My grandpa died and everything like that, so everything was going bad for me. And I really wanted this book, and I thought, “Well, I’m gonna try to steal it.”

So. I put it in my purse, and when I walked out the door at Walmart it beeped — the little security thing beeped. I don’t know what you call it, but it beeped. The person came over to me. He was, like, “Did you steal anything?” And I’m, like, “No. You can check my bag, dah, dah, dah…”

So he checked, and he was, like, “There’s a book right here. Did you pay for it?”

He checked the cameras and he was, like, “Well, you’re lying. We called the cops.”

So I came back there and he took pictures of the book. The cop arrived and he took the statement, and he was, like, “Well, if you didn’t lie to me I wouldn’t have never called the cops. If you were to tell me the truth, I would have let you go with a warning.”

…He took me to the police station and they took my prints, they asked me how many tattoos and piercings and all that crazy sh*t. And they took my mug shot. Y’all have probably seen it. I was a lot skinnier then! [laughs]

…They put me in the drunk tank and I stayed in there for two hours. My mom came and got me and that was the end of that. I was only in jail for two hours.

You know, court fees and all that was — everything added up to $400. Now, the price of the book originally was $8. EIGHT. DOLLARS. OK, this eight dollar book turned into four hundred. So, be advised if you are a little kid and you’re watching this, there are consequitches — conseQUENCEs.

But yep, we all have a past and we all learned from it, and move on. And I don’t think that my past should be an issue. I mean, yeah, I bet some of y’all’s been in jail and for worser stuff than I have! One book and I’m branded for life on the YouTube community.

But, that was my story.

HEY Y'ALL! YouTuber Amy Slaton and her sister Tammy Slaton are starring in their own TLC reality series #1000LbSisters premiering January 1! Watch the preview trailer, plus see the sisters' infamous #ChubbyBunnyChallenge video that went viral back in 2014! https://t.co/CJCuB2QpnK

Amy points out in the middle of the video that she had mentioned her arrest before on her channel, “and so I wasn’t trying to hide it from people or anything like that.” She also emphasizes that “I always learned from my mistakes, and this was a big mistake.” She adds: “I never will do it again.”

If you are completely unfamiliar with Amy Slaton, but her mug shot photo still looks familiar, there is a likely explanation. Her mug shot photo was used for a fake story that was originally published in October of 2018 with the headline: “Woman accused of stealing a pumpkin by hiding it in her vagina.”

Here are a few excerpts from the story, which eventually went viral with hundreds of thousands of Facebook shares:

A woman was arrested this morning in Greenville, Mississippi after trying to steal a 15 lbs pumpkin from a supermarket by inserting the large squash in her vaginal cavity. 31-year-old Sonia Smith was intercepted by security guards from a Supervalu store after they saw her enter the store’s bathroom with the pumpkin and come out with it.

…The squash showed extremely difficult to extract and the 31-year-old woman had to be transported to the hospital, where it was finally removed after a delicate two-hour surgery.

Numerous fake news debunking sites called out the article as made up, including Snopes.com in October of 2019 after the story apparently went viral yet again during the Halloween season.

No doubt, if that had been the real story behind Amy’s arrest then her video would have been much more entertaining!

You can keep up with Amy and her sister Tammy Slaton with new episodes of 1,000-Lb Sisters airing Wednesday nights at 10/9c on TLC.