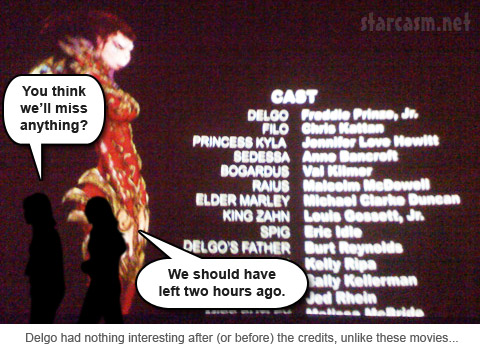 We’ve all been there: the movie ends and the only thing you can think about is how full your bladder is and whether you can get out the door before you tackle the kid who texted through the entire movie. The last thing on your mind is the credits rolling on as you stomp down the stairs.

But what really happens after you’ve left the theater? I’m not talking about those funny Jackie Chan bloopers or horrific Hangover photos. These are the clever little additions to the text that usually slide right on by. Rather than making you do the guesswork, here are a few interesting and funny end credit oddities in the movies you love—and those you love to hate.

Although Christian Bale is credited for his work as “Bruce Wayne,” the actor who played “Batman” is mysteriously not listed. Hmm, did that gravelly voice belong to a chain smoking cyborg, or was it simply an oversight? You decide.

What could these movies possibly have in common, you ask? They all have recipes in the credits. Italianamerican has Martin Scorcese’s mom’s spaghetti sauce recipe, Wayne’s World features a brownie recipe (with or without illegal substances is probably up to you), and Hot Shots! comes complete with two—a recipe for a brownie topping and nobby buns, bringing “dinner and a movie” to a whole new level.

– DVD release
Remember the Magisterium? Those dastardly no-goodnicks who were headed up by Nicole Kidman? Well, it seems they cover more ground than they’re credited for—the anti-piracy warning on the DVD release of the film was issued by this notorious organization rather than the oh-so-common FBI. Just remember, Nicole’s watching.

Have you ever wondered if you’re alone in the universe? Well, it appears that Will Smith has given us an answer: “The animals and aliens used in this film were in no way mistreated and all scenes in which they appeared were under strict supervision with the utmost concern for their handling.” Take that, Area 51.

TMI—too much information. Sometimes that’s all that can be said about credits. That’s definitely the case with Dogma as the director, Kevin Smith, takes a few moments to send out his heartfelt thanks to his loving wife Jenny and, of course, Ben Affleck. He sincerely thanks Jenny for giving him “strength, love and major booty” and gives a nod to Affleck for being “a pimp with passion.” The first is a visual we all could do without; the second is something that might require police investigation.

There’s plenty more where this came from. So next time when you’re running out the door of your local theatre, pause and consider: could you miss a movie gem if you leave too soon? Nah, you should probably just wait for another article.