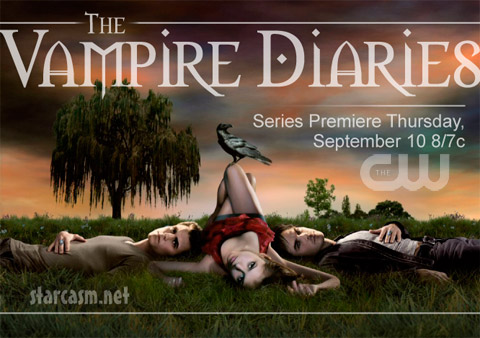 Sadly (for some) the epic saga of Edward and Bella’s undying love has come to an end—please don’t pardon the pun. Sure, we can all eagerly await the next installment of Twilight or argue for Team Edward v. Team Jacob with our closest gal-pals, but it just doesn’t seem to fill the void. What’s a girl looking for a supernatural hunk supposed to do? Most of you are probably already watching HBO’s True Blood series based on Charlaine Harris’s Southern Vampire Mysteries,

but coming this fall on the CW you can look forward to something a little closer to the storyline we all love—or hate. The Vampire Diaries has it all: teen romance, male rivalry, and the pain of high school.

Here’s a synopsis of the show straight from the CW:

Elena Gilbert has always been a star student: beautiful, popular and involved with school and friends. As the fall semester begins, Elena becomes fascinated with the mysterious new boy in school, Stefan Salvatore, and she has no way of knowing he is a centuries-old vampire. While Stefan struggles to live peacefully among humans, his brother Damon is the embodiment of violence and brutality. Now these two vampire brothers—one good, one evil—are at war for Elena’s soul in the small town of Mystic Falls, Virginia.

This small town stuff is enough to make any hot-blooded young woman reconsider a move to the big city. Starring two hot male leads (Paul Wesley and Ian Somerhalder) who could easily give Robert Pattinson a run for his money, the show looks to have a promising start. If the series remotely resembles the original novels

by L.J. Smith, then Twilighters (and perhaps some unbelievers) should be pleasantly surprised.

The Vampire Diaries is set to premiere Thursday, September 10th at 8/7c on the CW. To tide you over until then, here are a number of appetite-whetting promotional videos for the series:

VIDEOS of Joseph Sean McVey and his accessorized Pontiac