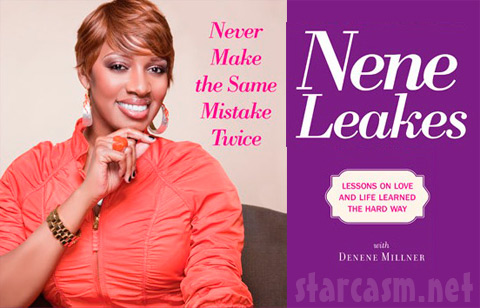 Here’s the thing about Nene Leakes: she knows herself a little better than, say, anyone else who’s ever been a reality T.V. star, especially the fantabulous girls of the Real Housewives franchise. She’s brass and crass, but what she lacks in class she makes up in a healthy dose of authenticity.

Nene stands out because she knows herself, almost in the sense of that Greek aphorism inscribed at the Temple of Apollo in Delphi. I’m not over-emphasizing Nene’s wisdom, or describing her as flawless, I just think she’s “on to something.” She’s a little less in denial than a lot of people. She’s not trying to spray rosewater on sh*t and call it potpourri.

Oh, and Nene knows that she comes off as authentic, and she is flaunting it, and means to sell it for all it’s worth. And she’s not denying that this is her intention, no, in fact she’s shouting it from the rooftops. In Never Make the Same Mistake Twice NeNe notes,

People get to tripping and start getting manipulative and ratchet up all kinds of needless drama, all in the name of getting their shine on. They’re trying to be someone they’re absolutely not and the viewers — and the fans — can tell who they are.

Part of what makes Nene so “real” is that she knows how to survive, and even thrive in life, and doesn’t see her life or anything that she’s done as anything other than it is. This quality comes out through her outspokenness on the show and the candid, intimate tone of her new book. Nene knows that in life, no matter who you are, or what airs you put on, you have to sell something to survive. For a while Nene sold her sex appeal and body on the stage as a stripper, then she auctioned off her heart to a man who could comfortably support her and her son, now she’s peddling her own sense of authenticity for the wealth and success she’s always dreamed off. The charm about Nene is that she is open about all of these things, and not ashamed of them. For this southern survivor, life is simply what it is, and what you make of it.

Now this doesn’t mean that Nene doesn’t ever lie or act phony or isn’t hypocritical or insecure. She’s all those things too. Most humans are. She’s lied about being a stripper (but came clean in this book), she’ll talk trash about women who label drop, then swear by her Gucci purse in the next sentence. The first chapter of her book was over-the-top, full of flashy language and needless bragging. Subtlety is not her thing.

But then, the book really gets started, and Nene really does get real. While she got some help from Denene Millner, it’s obvious this story is being told in Nene’s voice, and she takes the theatrics down a few notches and gets down to some pretty intimate story-telling.

From her difficult childhood, confusing parentage, abusive relationship, single motherhood, stripping job, meeting and loving Gregg, and filming a reality show, Nene doesn’t spare details of her fascinating story. She’s already brought the world inside her home, and invited us to witness drama with some crazy girls, and now she’s got no qualms about letting us a bit further into her life, and into her head. Never Make the Same Mistake Twice: Lessons on Love and Life Learned the Hard Way is an engrossing, page-turning read about a powerhouse of a woman. Once you start reading you can’t put it down. If you liked Nene on the show, you’ll like her more after you read this book. If you didn’t like her before, you might warm up to her.

Nene understands the art of storytelling, but she’s not hiding behind her words. There are flourishes and character, but she lays out her life pretty plain. Really the only thing in her colorful and often painful life she regrets is buying clothes from a girl who stole them. She doesn’t wallow in her regret, she just explains why she did that in the first place, and why she now knows it was wrong.

She doesn’t ever apologize for being a stripper, because frankly, she doesn’t think there’s anything wrong with it. The way she describes her stripping experience is candid and enthralling. She owns that part of her life, sees the good in it, and credits it for helping her gain back her self esteem after an abusive relationship.

She also talks candidly about the perks of being a celebrity, which she embraces with enthusiasm. This is exactly what she’s wanted all along, and now she has it. She also talks about some of the annoyances of celebrity, the strain it causes on her marriage and her desire to just go out. At one point she laments how she can no longer go to one of her favorite stores, T.J. Maxx, because of what people will say about her. She keeps it real, but still cares if people think she’s broke. To set the record straight, she explains many times that she’s making bank from BRAVO, appearance fees, and opportunities like this book.

What’s really a small part of the book is her criticism about Kim and Sheree. Their two chapters are pretty short and don’t reveal any dirt. What she does do is attack their characters, not exactly udfairly. We all know that Kim’s certifiable and Sheree can be a pretentious b*tch and a half. Nene does go deeper into painting her friendship with Sheree, and Sheree’s betrayal of that friendship.

Nene was never good friends with Kim, she knew she was insane from the start, and she makes it clear she in no way plans to be friends with Kim in the future. The chapter on Kim, title “Stay Far Away From Nuts” is a pleasure to read but doesn’t divulge much new information. She does mention that Kim tried to go after Lisa’s husband at some point. She doesn’t say in the book that Kim was a stripper named Barbie, which has been widely reported to be in the book. Nene claimed on Watch What Happens that Kim made up that rumor herself.

Nene’s life is definitely different. She grew up a tad poorer than most, and lived her adult life richer than most. The women she criticizes in her book are the type of women that most people in the working middle class know. She’s complaining about girls that don’t work and who’s biggest concern is that they don’t have the latest Gucci bag. Nene is as real as she can be, and although most people can’t relate to her problems from the new-money Atlanta social scene, we appreciate her honesty, her connection to her roots, her comedy, and of course, her striving to “keep it real.”

Nene Leakes opens up about stripper past

Dwight Eubanks not returning to Real Housewives of Atlanta, says show is “buffoonery”