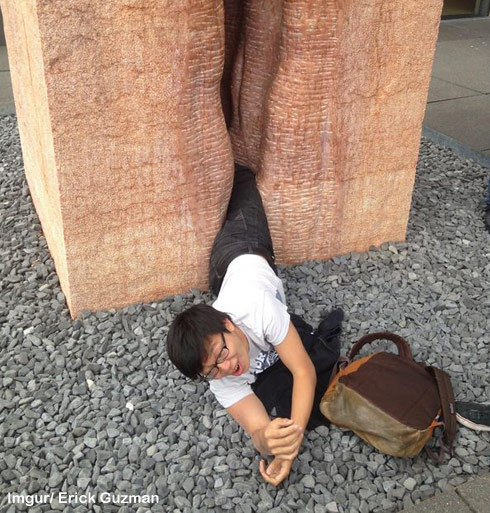 On a dare Friday, an American exchange student inserted himself into a large marble vagina statue located on the campus of Germany’s Tubingen University Institute of Microbiology.

After achieving his goal, said student got stuck while attempting to pull out from the art installation called “Pi-Chacan” by Peruvian artist Fernando de la Jara.

According to Metro, 5 emergency vehicles and 22 fireman arrived on scene and were eventually able to slide the young man out from his embarrassing predicament. While he did escape the trap, he did not escape the “friend with a camera” pitfall as his buddy Erick Guzman managed to snap the above pic that he shared to Imgur.

Guzman wrote on Facebook, “While in Germany, my friend became entrapped in the stone vulva.”

I’d be amiss if I didn’t open the below comment sections for a “caption this” contest.

Another day, another Florida back alley buttocks injection scandal

What Dr. Drew stalker Charles Pearson claims happened to him