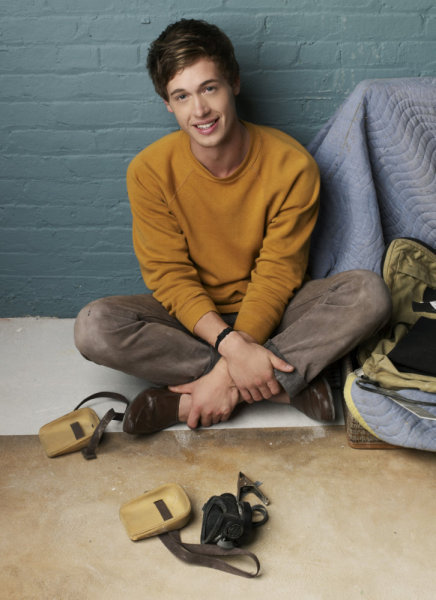 We are only two episodes into the inaugural season of Bravo’s Project Runway inspired reality competition Work of Art: The Next Great Artist and a couple of the artists already appear to be separating themselves from the pack. One of those quick out of the gate is 23-year-old Miles Mendenhall, a printmaker and installation artist from just outside Minneapolis, Minnesota. 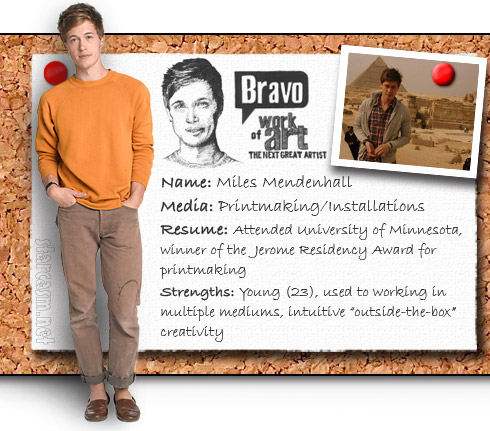 Miles graduated from Lakeville Senior High in Lakeville, Minnesota – about 20 miles south of the Twin Cities of Minneapolis/St. Paul. According to the “Get to Know Miles” video on Bravo (see below) he was only allowed about 30 minutes a day to watch television and spent a huge chunk of his time entertaining himself in a large wooded lot behind his parents’ house. All those years of “making his own fun” are what set him down the path to becoming a visual artist later. He says in the video, “I’m probably continuing to make art now just because when I was a kid and I was making things and doing drawings I think it was probably one of the most pure things that I’ve ever done in my life.”

Miles attended the University of Minnesota, but there are conflicting reports as to whether or not he managed to graduate. His Bravo bio states that he is “a recent graduate from the University of Minnesota” and that he was able to “sell the entirety of the art in his senior show,” but in the video above, Miles states that he attended the university, but never graduated. Whatever the case, Miles and the U of M are obviously on good terms because they used him in a couple videos uploaded to YouTube.

In his Bravo video, Miles describes himself as an installation artist, but most of the examples of his work to be found online are two-dimensional paintings and prints. His paintings are odes to Salvador Dali and Surrealism done in toned-down pop art fluorescent colors. Here is one of his paintings taken from a YouTube video interview: 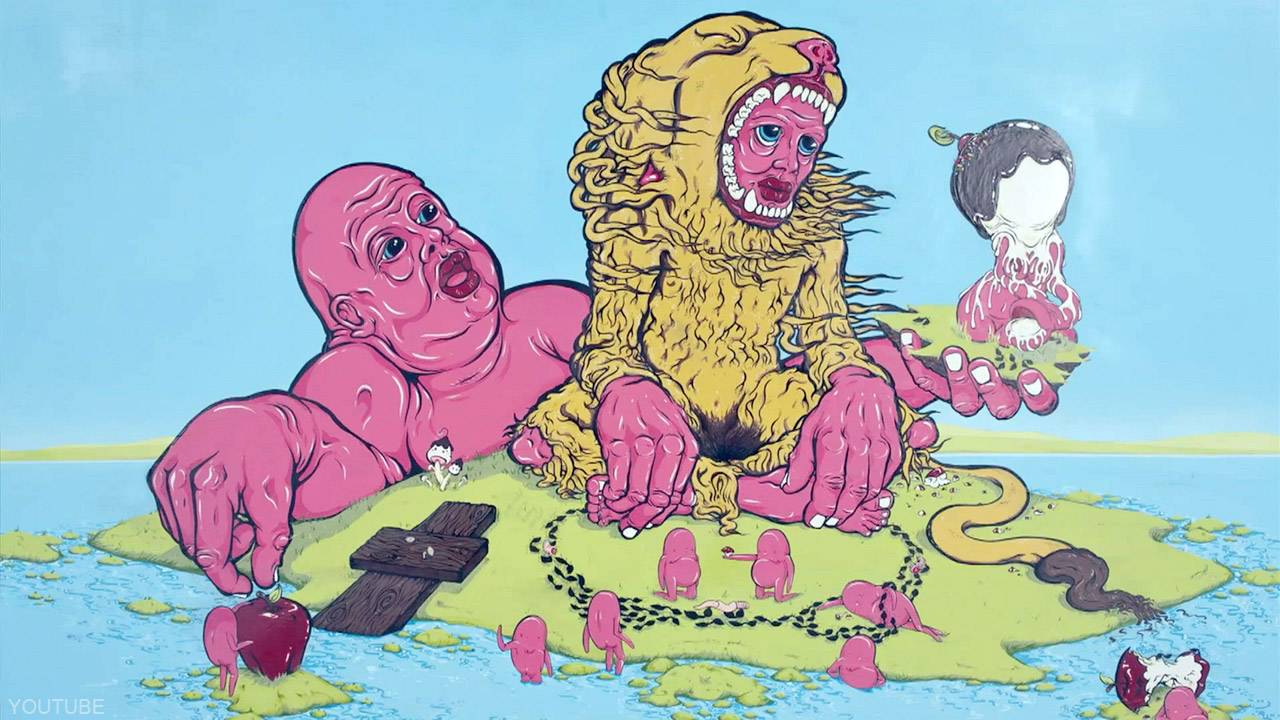 Here is a detail from Salvador Dali’s “The Accommodations of Desire” from 1929: 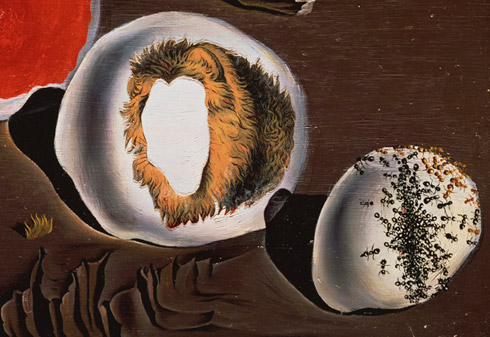 I’m not suggesting Miles ripped off Dali, quite the contrary actually – I think he put a fun, modern, and uniquely Milesian spin of some of the motifs used by Salvador. I believe it was Picasso who once said, “Bad artists copy. Great artists steal.” It’s definitely not a copy we’re looking at here!

The only example of Miles’ 3-dimensional work I could find online is this funny chair, painted out with an enlarged faux wood grain and including what appears to be a cartoonishly over-sized nail: 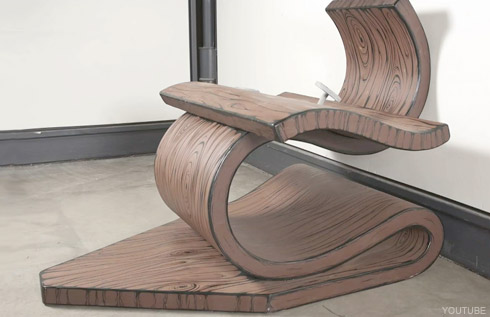 After going through the obligatory Dali phase, Miles Mendenhall moved on to the allure of geometric shapes and mathematics through the medium of printmaking. For an exhibition of these black and white prints coupled with splattery, bright orange smiley faces reminiscent of Heath Ledger’s Joker at The Gallery at Fox Tax, Miles states, “I’ve begun writing formulas based on spatial geometric theory, substituting a lot of the personal decision making for something that’s already pre-ordained. Setting it up so that there are right and wrong answers when dealing with scale, angles, form, etc.” (Reminds me of Joseph Albers’ approach to hue in his book, Interaction of Color.)

Here is an example of his geometric pattern period titled “Drip:” 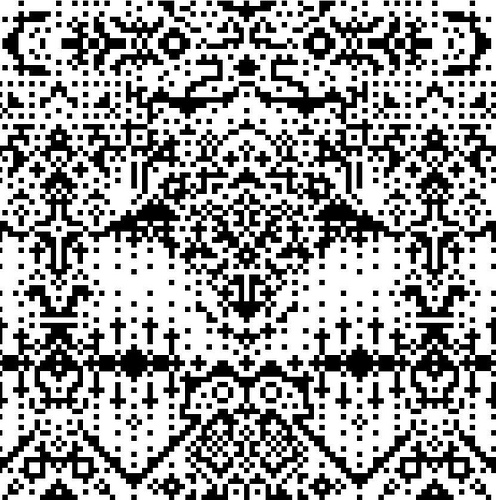 Miles’ more recent forays into screen printing still have an affinity for geometry and lack of color, but the crisp edges and strictly black or white compositions have give way to softer, blurrier compositions with all shades of gray in addition to the pure black and stark white. These prints are featured in Miles’ show at The Highpoint Center for Printmaking in Minneapolis, at which he was a resident for a year after winning a prestigious Jerome Residency award. (According to their website the show featuring Miles’ work as well as two others’ is currently up and will remain open until June 26.) 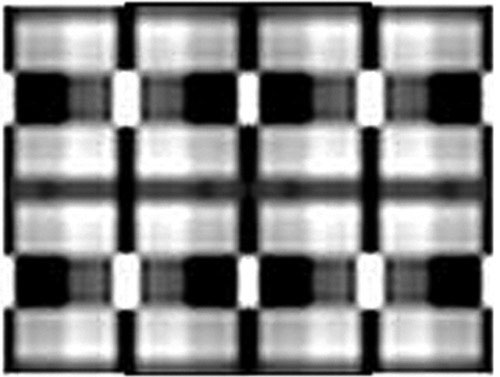 The print above is one of Miles Mendenhall’s most recent. It is 32″ x 42″ and is referred to as “Screenprint on Rives BFK” on MilesMendenhall.com.

Miles seems to have a real advantage on Work of Art not only because his young age makes the grueling schedule more tolerable, but his diverse interests as far as media give him a versatility that suits the format of the show and the week-to-week challenges perfectly. But, his biggest asset by far is his intuitive creativity, and that combined with an OCD-ish obsession for details and craftsmanship should take him all the way to the finale! The only thing that worries me is his affinity for the conceptual punchline, like sleeping on his bed sculpture. Those ideas are fantastic when they succeed, but when they fail, they can be fatal in a competition like this. That being said, part of why Miles is the early favorite is because he chooses to be risky and has the talent to pull it off. Plus, it’s hard to be eliminated when you have immunity!

Stay tuned for more profiles of some of my early favorites to make it to the final. Until then, be sure to check out our profiles of the host China Chow, mentor Simon de Pury and members of the judges’ panel: Bill Powers, Jerry Saltz, and Jeanne Greenberg Rohatyn!

UPDATE – The profile for Abdi Farah is up!

Who is Bravo’s ‘Work of Art’ judge Bill Powers