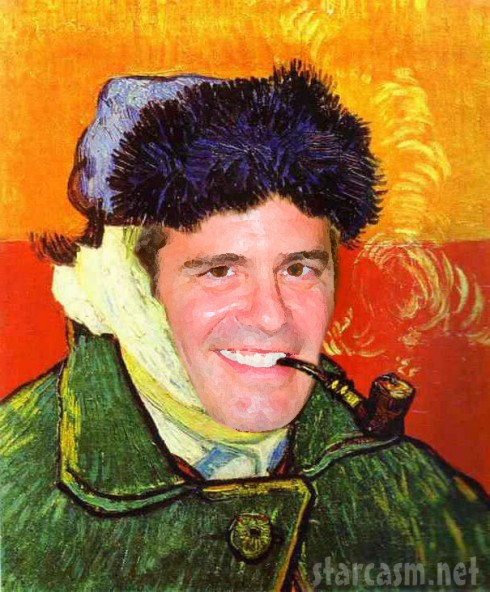 Bravo has brought back it’s Project Runway inspired reality competition Work of Art for a second season, as a whole new batch of aspiring visual artists compete each Wednesday night for a $100,000 grand prize, a show at the prestigious Brooklyn Museum, and the title of “The Next Great Artist.”

Although this year’s cast includes some mighty talented folks, including the rather sardonic and self-professedly campy Suck Lord, the network seems to have missed a golden opportunity to feature one of its own talented arteests… Andy Cohen!

That’s right, the good-natured producer and host of Watch What Happens: Live! has got some mad visual art skillz y’all! Working in a genre I like to call urban folk, Andy creates his masterpieces “on the clock” in the form of masterful doodles done during various board and production meetings.

Here is one titled “#DoodleByBravo” drawn by Vincent Van Cohen on September 7: 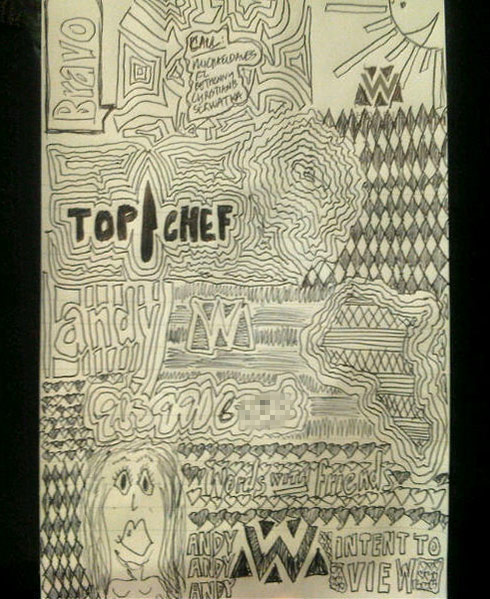 Essential to understanding these masterpieces are Andy’s accompanying tweets, which is this case was “Just doodled for 3 straight hours in a meeting #DoodleByBravo”

*** I’m not much for censoring fine art, but Andy included someone’s phone number in the original and I just couldn’t bring myself to leave that in there. After all, it could be Giggy’s number! I don’t want Giggy gettin’ a bunch of random phone calls from drunk starcasm readers!

This next one is simply titled “#Productive” and was created on June 23, as you can see in the work: 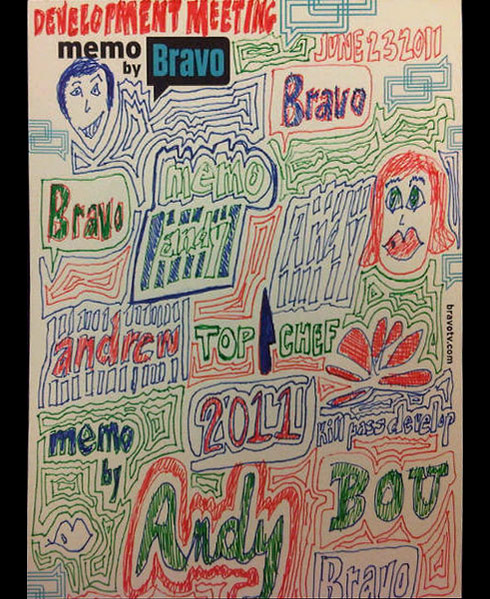 And Andy’s accompanying comment was “Here’s my doodle from a 90 minute development meeting I just left. #productive”

“#Productive” is extremely rare in that it is one of the few known times Andy Cohen has incorporated color into his work. His uses of red green and blue bring to mind Jasper Johns’ series of crosshatch paintings from the late 1970s. The wavy lines symbolize psychological tension, which is only further emphasized by the dramatic triad of choices: “kill, pass, develop.” 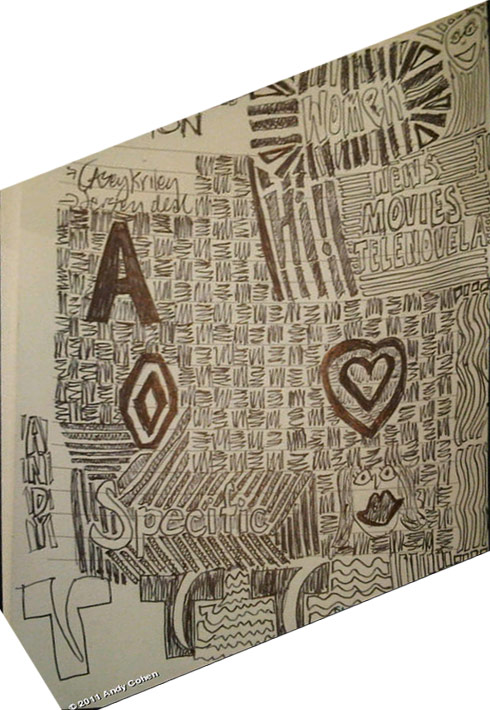 Andy shared this gem on April 13 with the remark, “Just leaving a NINE HOUR meeting. Here’s just one of my doodles from the morning session. #WorkOfArt?”

This work is most notable because it is the first known work by Andy to ever be shown publicly. You can really see Andy’s distinct style beginning to emerge as he works Bravo work motifs into his composition in the form of words like “News,” “Movies” and “Telenovela.”

*** Sadly the original digital version of this work was shot at an angle and cropped quite a bit, which may have been the artists intention – perhaps to symbolize loss, as in loss of time spent at the meeting? I’ve reconstructed it here as best as possible, but you can see the original here.

For extra fun, see how many times you can find Andy’s name (in one form or another) in the pieces! Also, there is a Bravolebrity’s name present as well. Think you can find it?!? (Producers don’t count!) (Sorry Dave Serwatka and Casey Kriley!)

All other photos: Andy Cohen / WhoSay