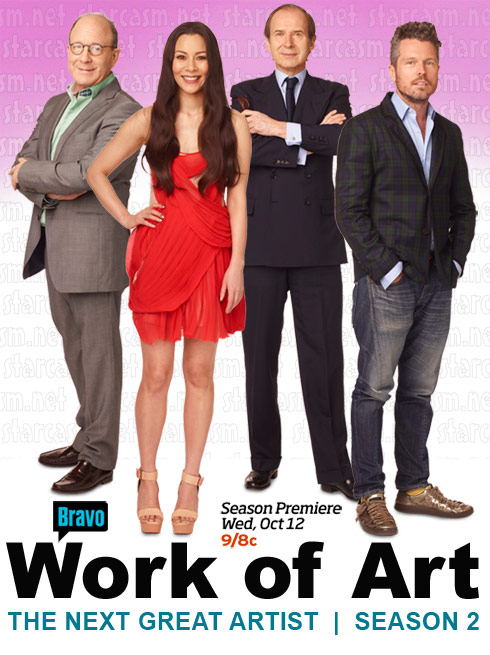 It’s official! Bravo will be bringing back Work of Art: The Next Great Artist, their fine art ode to Project Runway, for a second season as 14 up-and-coming artists gather together in New York City and compete in a series of judged challenges in a wide range of media that includes painting, sculpting, drawing, photography, graphic design, performance art and more. The grand prize is $100,000 plus bragging rights for being “The Next Great Artist!”

Most everyone returns for Season 2 including life-long art lover (and all around beauty) China Chow as host and Simon de Pury, the French accented and less reserved version of Tim Gunn, as mentor.

The judges’ panel did have a slight change as New York gallery owner and art collection consultant Jeanne Greenberg Rohatyn is no longer a permanent member, although she will appear as a guest judge at some point during the season. Otherwise, the panel remains intact with Bill Powers, who delivers his modern take wrapped in niceties and handsomeness, and hardballer critic Jerry Saltz, who fills the roll of Simon Cowell/Tom Colicchio/Michael Kors with his straight-forward unapologetic (and well-educated) critiques.

Here’s a Work of Art Season 2 preview clip from Bravo:

Being an artist myself, I was cautiously optimistic when Bravo announced this show last season. As it turns out, it didn’t disappoint! I liked the challenges, I like the fact that they didn’t feel obligated to mix up the tried and true Project Runway blueprint, and I think the right artists made it to the finale. (Actually, after week 2, I predicted that Abdi Farah and Miles Mendenhall would be there at the end. I was sort of blindsided by Peregrine during the rest of the season, but completely agree with the judges’ choice to place her in the final three!)

I can only assume that China, Simon, the judges and the producers will be even better the second time around having already been through one season together – and at first glance it appears as though the caliber of artists competing this season are a little bit higher. I’m going to try to find the time to work in a few profiles on the competing artists, but until then here are the brief specs with links to the artists’ bios on the Bravo web site:

BAYETE
Age: 34
Hometown: New York City
Bayeté is a photographer who started out as a photo journalist for Knight Ridder and has since built an impressive resume that includes appearances in numerous magazines and a collaborative film that screened at the 2008 Sundance Film Festival.

DUSTY
Age: 32
Hometown: Mountain View, Arkansas
Dusty is a sculptor and installation artist with a BFA from Arkansas State and an MFA from Michigan State. He currently lives in Arkansas and teaches elementary school art as well as college classes in art at night and during the summer.

JAZZ-MINH MOORE
Age: 32
Hometown: New York City
Jazz-Minh reminds me of Peregrine from last season in that she was born on a hippie commune in Oregon, and later raised in a small house on a dirt road near San Diego. Jazz-Minh is primarily a painter with a BFA from Cornish College of the Arts in Seattle and an MFA from California State University, Long Beach.

KYMIA
Age: 30
Hometown: New York City
Kymia is originally from the South and received her BFA from East Carolina University and her MFA down in Gator country at the University of Florida. She’s currently waiting tables in New York City and trying to make ends meet while she pursues her dream of becoming a full-time visual artist.

LEON
Hometown: Kedah, Malaysia
AGE: 31
Leon was born deaf in Malayasia and later graduated from Rochester Institute of Technology and De Montfort University in the United Kingdom before settling in New York City where he dabbles in a variety of mediums including painting, photography, multimedia, installations, and performance objects.

LOLA
Age: 24
Hometown: Los Angeles
Lola was born in Studio City, California and grew up on both coasts, shuffling her time between Los Angeles and Sydney, New York. Lola studied sculpture at the School of the Art Institute of Chicago and received her BFA from OTIS college of Art and Design. She currently lives in Los Angeles where she enjoys boating and, ummm… snake charming?

TEWZ
Age: 31
Hometown: Chicago
Tewz is best known for his graffiti and street art, but he is a versatile artist with skills in serigraphy, painting, sound, graphic design, photography, and many others. He studied printmaking at The Art Institute of Chicago and he currently teaches art at the South Chicago Art Center.

MICHELLE
AGE: 29
HOMETOWN: Hometown: Bridgewater, NJ
Michelle is a sculptor currently living in Brooklyn with a degree from the School of Visual Arts in New York City. She has worked for a number of well-known galleries and was an assistant to several prominent artists, including Marilyn Minter and Josephine Meckseper.

SARA J
Age: 26
Hometown: New York City
Sara moved to the Big Apple after completing her BA at the University of Toronto and has since “cultivated a signature style of painting through the use of unusual mediums.” She has also dabbled a bit with installation work, which should prove valuable on the show!

SARAH K
Hometown: Cleveland, Ohio
Age: 34
Born in Royal Oak, Michigan Sarah is a sculptor and installation artist with a BFA from the University of Michigan and an MFA from Cranbrook Academy of Art in Michigan. I get the impression from the Bravo bio that Sarah K is a bit of an academic (I assume they helped write their own bios) because it says her work is “inspired by quotidian objects and spaces, copying, mirroring, and amplifying the chosen structures, creating tension between the original and the intervention.” Ummmmm… Huh? Sarah currently teaches art at the Cleveland Institute of Art.

THE SUCKLORD
Age: 42
Hometown: New York City
I’m going to have to lift this one straight from Bravo because I don’t think I could say it any better… “The Sucklord is the creator of SUCKADELIC ENTERPRISES, an evil arts organization based in Chinatown NYC. Specializing in bootleg action figures, illicit remix records, and low-budget sci-fi movies, The Sucklord seamlessly blends geeky nerd obsessions with street-level hipster cool.”

UGO
Age: 34
Hometown: Paris, France
Born and raised in Paris, Ugo came to Chicago as an exchange student and later spent a few years in New York City before finally settling down (for now) in Venice Beach, California. Ugo only began making art six years ago but has since become adept at drawing, painting, creating videos, and photography.

YOUNG SUN
Age: 28
Hometown: Skokie, Illinois
Young Sun is world traveler having lived in London, Chicago, Germany and New Zealand. In addition to having lived in many places, Young Sun has also learned many skills as an artist and is well-versed in such varied mediums as photography, installation, and performance art.

Who is Bravo’s ‘Work of Art’ mentor Simon de Pury?