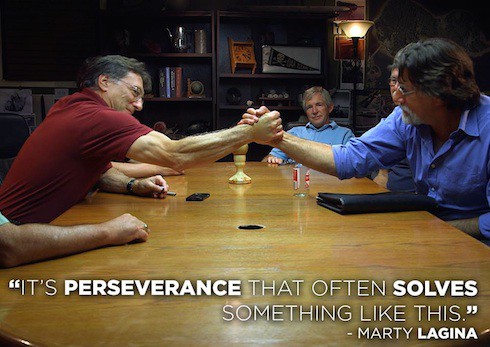 The Curse of Oak Island Season Finale is here, and, this time, the Lagina brothers promise their decade of hard work will “pay off.” What that means is a mystery (for a few more hours, at least), but devoteés of the History hit have noticed a new urgency to the Season 4 finale promos.

It sure looks like the show is promising some kind of discovery–though it’s always possible that the latest “discovery” is just another reason to keep digging. (And judging by fan reaction, most of the show’s viewers have no problem with that.) In case you’ve missed it, here’s the latest Curse of Oak Island season finale teaser:

Judging by what little we have to go on, it seems that three possibilities are in store:

1) Rick and Marty actually do find the elusive Oak Island treasure. Not every season finale has been two hours long, so, if you feel like investing in some earnest, irony-free belief, it’s possible to get yourself worked up over the likelihood that the Lagina brothers actually, really did find some honest-to-God treasure. Or, at the very least, that they found something valuable, whether or not it was the treasure they had in mind.

2) Rick and Marty find yet another compelling reason to keep digging. Given how the show generally works, this seems the most likely option. Astute viewers have pointed out that the episode is being billed as a season finale–not a series finale. If Rick and Marty really do find treasure, the show has no reason to continue. (Though it’s also worth pointing out that calling it a “series finale” would be a pretty big tipoff.) If option #2 turns out to be what happens, then the treasure in the Money Pit really is the show itself, and it’s more viewers that the brothers are digging for 😉

3) Rick and Marty decide to call it a day. The fact that the episode is being billed as a season finale instead of a series finale could in truth mask the fact that the brothers Lagina have decided to wrap up their dig and leave whatever the Oak Island mystery really is for the next generation(s) of treasure hunters. Oak Island has hit on themes of brotherhood and family more than ever in Season 4, and the question of when to stop digging also comes up often–and if the whole Lagina family isn’t on board with the dig, we’ll likely have seen the last of the show.