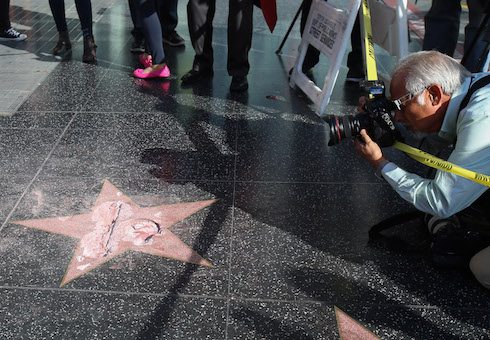 For the second time in two years, someone took a heavy object to Donald Trump’s star on the Hollywood Walk of Fame and smashed it to bits. But getting one isn’t exactly the honor most people seem to think it is. How do you get a star on the Walk of Fame? The answer involves a little bit of luck — and a lot of cash.

The second destruction was more thorough than the first

Per The Hollywood Reporter, the Los Angeles Police Department got a call about “the star being destroyed” at 3:33 PST this morning. The star destroyer had already vanished by the time police arrived, but the damage he did was considerable.

For comparison’s sake, the photo at the top of the article is the aftermath of the first destruction, back in 2016. Here’s what today’s damage looks like, via Jonathan Gonzalez of NBC LA:

So this just happened again… somebody used a pick axe to destroy Donald Trump's star on the Walk of Fame. Still trying to learn more, but we know it's been vandalized multiple times, just never on this level. @NBCLA ?: Victor Park/Loudlabs pic.twitter.com/lzq7YrsSRV

Gonzalez reported via tweet that a man apparently “walked up with a guitar case and pulled out [a] pickaxe,” took it to Trump’s star, and “called police himself to report it” before fleeing.

Also per Ryan Parker, the person suspected of destroying Trump’s star for the second time is in custody. The 25-year-old man “has yet to give his motive” to the LAPD.

The process for getting a star isn’t especially challenging or meritorious. Anyone can submit a nomination to the Hollywood Chamber of Commerce, the body in charge of organizing the Walk. (Per the Walk’s own FAQ, the actual physical sidewalk is still city property.) The HCC also makes the star selections.

After that comes the most taxing part: as the Los Angeles Times explains, the person who submitted the chosen nomination has to pay a $40,000 fee. Half of that money goes toward the star itself; the other half is dedicated to the star’s upkeep. (It seems safe to assume that at this point Trump has more than used up his $20,000 upkeep allotment, though we’ve yet to hear back on whether the person who nominated Trump — or Trump himself — will have to fork over another $20,000 for future reconstruction.)

So the short answer is if you’ve got a free $40,000 and a friend to whom you’re willing to transfer it, you, too, can have your own star on the Hollywood Walk of Fame.

The Walk’s “talent” requirement has raised a few eyebrows

Of course, beyond the nomination and the hard cash, there is one other requirement: namely, some sort of a connection with the entertainment industry. Officially, the nominee has to fit within one of five categories: Live Performance and Theater; Motion Pictures; Radio; Recording; and Television.

In the following years, a rep for the Walk used “Get a real acting job” as an excuse, and also suggested that reality stars are ineligible because the genre hasn’t been around as long as the five current categories.

Which is still true…but it’s also true that reality shows have only become more popular in the years since Kim Kardashian was denied a star. And Donald Trump got his star all the way back in 2007, when his reality show The Apprentice was at its apex of popularity. Plus, before that show, literally every single one of Trump’s appearances in TV and movies was a cameo in which he played up his own celebrity and wealth. It’s probably time for the Chamber of Commerce to at least revise its reality TV policy, if not overturn it.

UPDATE (2:56 PM): In response to our question about whether someone will have to repay for Trump’s star now that it’s been demolished twice, Ana Martinez, the official Producer of the Hollywood Walk of Fame, gave us this response:

“The Hollywood Walk of Fame is an institution celebrating the positive contributions of the inductees,” said Leron Gubler, President/CEO of the Hollywood Chamber of Commerce. When people are unhappy with one of our honorees, we would hope that they would project their anger in more positive ways than to vandalize a California State landmark. Our democracy is based on respect for the law. People can make a difference by voting and not destroying public property.”

Gubler said the Chamber is working with the police in regards to this felony and intends to prosecute to the full extent of the law. He said this is something the Chamber would do for any Walk of Fame star that has been vandalized. The Chamber understands that there is surveillance video of the vandalism and the perpetrator has turned himself in.

The Hollywood Historic Trust will repair the star immediately but requires several days of seasoning before it is polished. During that time, it will be covered to protect it.

(Photo credits: How do you get a star on the Walk of Fame via SplashNews.com)

Did Louis CK commit sexual assault? The origin of the allegations against him

How did Ina Garten’s husband, Jeffrey Garten, make his money?