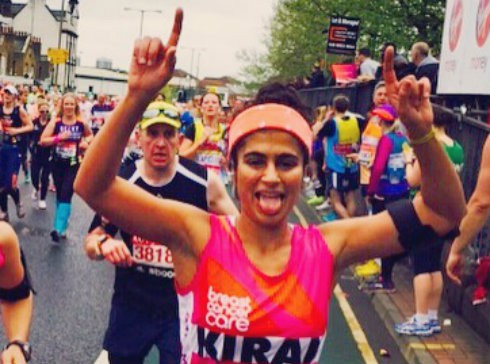 As a runner, I know it’s common to see some otherwise unusual things on the course: Men bleeding from chaffed nipples, a few people who weren’t able to make it to the bathroom in time, etc. But Kiran Gandhi took it a step father during the London Marathon in April when she decided to run without a tampon — knowing very well that she would bleed during the race.

“I got my flow the night before the London Marathon and it was extremely painful,” Kiran said in a recent post for Medium. “Running 26.2 miles with a wad of cotton material wedged between my legs just seemed so absurd… I decided to just take some midol, hope I wouldn’t cramp, bleed freely and just run.”

While running, the Harvard graduate said she thought “about how women and men have both been effectively socialized to pretend periods don’t exist.” She explained in the post that millions of women face financial, societal or other barriers when they have their periods. (More graphic photos are available to see on Kiran’s original blog.) 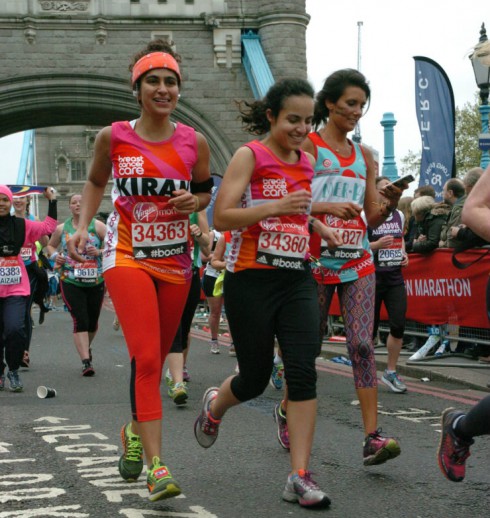 Although many are applauding her admirable stance, not everyone online supports Kiran’s method for raising awareness. Here is a sampling of comments…

“People are commenting that it’s gross, because that’s exactly what it is. If I sh*t myself and walked around saying it was to ‘de-stigmatise’ the plight of people without access to toilet roll or sanitation, I’m pretty confident people would say the same thing,” one said.

“Running a marathon during your period is some achievement but we do not need the histrionics of the blood letting,” another said. “Women have coped without tampons since the dawning of time and some still have to – but they find ways to maintain hygiene and dignity without this overt misplaced feminist attempt to highlight a problem of nature.”

Do you support Kiran’s decision or think it was unnecessary?