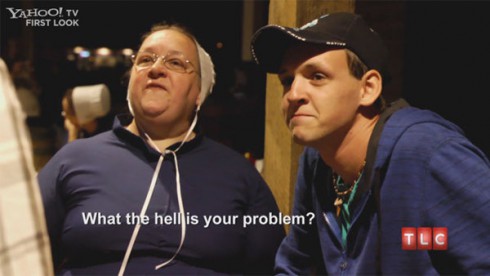 Breaking Amish‘s Mary Schmucker was shunned when she decided to appear on television with her son Abe during the first season of Breaking Amish, and although she didn’t leave the Amish community, she risked being shunned again when she followed Abe and his wife Rebecca to film Season Two in Sarasota, FL. She brought along her daughter Katie Ann, who though about leaving the Amish for a while, even getting an English makeover, but ultimately decided to return to the Amish. Mary reveals on the reunion special that she has been shunned again for choosing to move away for a while and participate in the show.

What does shunning mean and why was Mary shunned?

Shunning in the Amish community is called Meidung, which is the German word for avoidance. There are two kinds of shunning, temporary and permanent: and it looks like the kind of shunning Mary experiences is temporary. The purpose of temporary shunning is to remind a sinner of their sin, and to try to convince them to change their ways. It doesn’t involve a cessation of all social interaction, but many things change. Some ways shunning may manifest include making the shunned eat a separate table at an event like a wedding, not doing business with the shunned, not riding with cars with the shunned, and not giving or receiving items from the shunned.

According to this website about the Amish, shunning in the Amish community is based on these two verses from The New Testament’s 1 Corinthians:

11 What I meant was that you are not to associate with anyone who claims to be a Christian yet indulges in sexual sin, or is greedy, or worships idols, or is abusive, or a drunkard, or a swindler. Don’t even eat with such people.”

Mary said she knew that the bishop would make an example out of her if she went to Florida, and that the decision to go wasn’t easy, but she knew what to expect because she’d been through it before.

Will she ever leave the Amish?

She says she’s thought about leaving a “million times,” but she feels like she wouldn’t have anyone to support her financially if she left. She left when she was young, and found herself homeless, and she never wants to find herself in that situation again.

Sabrina immediately volunteered to help, and Abe said he would “do my best” to help his mom if she left the Amish and needed a place to stay. Maybe if Mary continues her reality show career she can use that income to land on her feet as an “English” lady. She could maybe supplement her income with appearance fees (Who wouldn’t want Mary at their party to liven things up?) and product endorsements (Vodka, canned beef, the possibilities are endless.)

RETURN TO AMISH Jeremiah says $15k that Carmela ‘stole’ was her own money, both react to negative comments