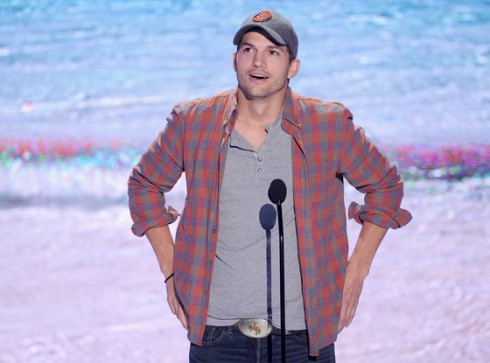 He initially joked that his honor was a “geriatric” award because at 35 he IS practically an old guy in the eyes of teens. Then he made a revelation: “I feel like a fraud,” he said. “My name is actually not even Ashton. Ashton is my middle name. My first name’s Chris.”

And since he was being honest, he decided to lay his heart on the table and give some genuine life advice. He said he’s learned three things from working in the entertainment industry: 1. “Opportunity looks a lot like work,” 2. The sexiest thing in the entire world is being really smart,” and 3. It’s better to “build a life,” than to just live one.

“I’ve never had a job in my life that I was better than,” he said. “I was always lucky just to have a job. And every job I had was a stepping stone I had to my next job and I never quit my job until I had my next job.”

“Life can be a lot broader … when you realize one simple thing: And that is that everything around us that we call life was made up by people who were no smarter than you,” he continued. “And you can build your own life that other people can live in. So build a life. Don’t live one. Build one. Find your opportunity, and always be sexy.”