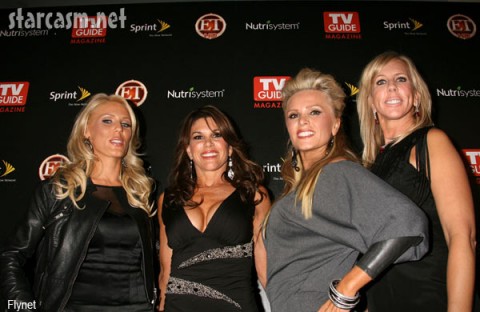 During Season 6, Episode 5 of Real Housewives of Orange County: “Friends, Facelifts, and Florida,” Tamra and Gretchen met up to talk out their troubles. At some point they sort of made-up and Tamra asked Gretchen to take down a blog post from her website (gretchenrossi.com, which is no longer in service).

Thankfully, the folks at Lipstick Alley snagged the post before Gretchen complied with Tamra’s wishes. Here’s some of the best excerpts:

“First of all let me state this very clearly, Tamra changes her story according to how it best suites her in that moment. I have honestly never met anyone so contradictory in my life (or someone that just plan lies to your face)

Story #2: I said it on the reunion show and I say it again now, “I cannot control what someone else does”. Jay was someone that I thought was a friend and it turned out he wanted something much more with me, when he couldn’t have that it caused him to do things that were not normal. Jay calling Tamra in the middle of the night was because he was drunk and angry. He wanted to hurt me and therefore he tried to create conflict by calling Tamra and claiming he was my boyfriend. Tamra took the bait, hook line and sinker and he got exactly what he wanted . . .  Unbeknown to me he was going through my things, stealing pictures, and had access to my computer during those times . Now I know he was planning on hurting me with those things at some point if he couldn’t have the relationship he wanted. I later heard that he was heard bragging around town he would figure out a way to make money off me. After Jay made the phone call to Tamra that night I felt horrible and called her in the morning saying how sorry I was that he called her that night and that he was acting like a stalker, because his actions were causing me to feel that way. I didn’t speak to him for weeks until he sent a “I’m sorry” e-mail. He stated he was drunk and was wrong for doing that. Tamra and I correlated over e-mail, she said she understood and was sorry I was dealing with that because she has dealt with some of the same issues with guys from her past before, and I believed we had put it behind us. Obviously that was not the case . . .

Story # 3: In regards to her comments on Bass Lake, Jay decided to drive up to Bass Lake for one day claiming he was sick of partying in Havasu for the holiday. My family knew who he was because we had dated before and he had been a good friend helping me out around the house. My parents would have never allowed Jay to be there if they believed for one second I was having an affair with him on Jeff! The film crew was there that weekend as well, shooting for the show, so why in heaven’s sake would I allow this guy to be on camera if I was having an affair? Isn’t that just plain stupid? For Tamra to act like she was “calling me out” on something during the reunion show about him being in Bass Lake is hilarious because she didn’t even know any of the details.

Story #4: Tamra would just love it if she could convince everyone that I was using Jeff this “poor sick man to get on T.V.” Tamra even said to me at one of our first lunch meetings that Simon seemed to think that Jeff being ill was a big advantage for me because then everyone would feel sorry for me and like me. I found that to be a strange statement. She knew her claims about Jay would help excuse her behavior as a person and possibly make people doubt me or not like me. Are you kidding me, how sick can they be? How can someone possibly say something so awful about a couple dealing with a deadly disease? And for the record again, I was approached to do the show, I didn’t audition like Tamra did through the internet by sending in a resume and picture to do the show. I had no intention of doing the show and certainly didn’t go looking for it. It was an opportunity that was brought to me, I originally was very hesitant to do the show but Jeff, who always liked an adventure, was actually the one that convinced me to do the show.

Story #5: Tamra states in her blog that “she was prepared to talk about Jay at the reunion show” yet in the weeks prior to the show she sends me texts saying she has no intention of talking about Jay because she didn’t want the drama and that is exactly what the audience wants”. . . Throughout the off season as Tamra and I talked she told me many times to be careful of Jay and that she believed he was trying to get his 15 minutes of fame. This is also when she told me about the continuous phone calls he made too them. So if she knew he was “trouble” and was only trying to get his 15 minutes of fame then why would him texting Simon affect her so much that she turned into such a mean b**ch on set. I couldn’t quite understand it and that is why you see me asking her “why do you care so much about who is my friend or not, how does it affect you?” I just couldn’t understand the reasoning behind her ambush. Especially because I felt we had buried the hatchet on this issue many many times. . .

Simon writes this in the e-mail to his beloved wife and I quote; “So what did you say to Gretchen and Vicki at the pool? And maybe you should tell everyone the truth about Vegas and how you lied to me to get me to come up there. Or I will” The whole truth? I don’t need Jays text to prove what you told them lies about me the next day. Marriage is about being honest and loyal. Try it. I would have never done that to you. I don’t deserve it. Make it right.” End quote! Isn’t it funny how in every blog or piece of press Tamra claims she’s just “ Keeping it Real” or “The truth will set you free” Ha Ha Ha She tries so hard to convince the world she is always being truthful because every other word out of her mouth is a bullsh.. two faced lie.

Story #6: Tamra having to show up in court! What a flipping joke this one is. For the record I didn’t just NOT show up for my own court case. I DROPPED the case the day before it was even heard in court. That was from advice of my attorney, as Jay told his own attorney he didn’t care if I got a restraining order against him, which lead me to believe all he wanted was a media circus and I was not about to allow my serious concerns to be made a mockery out of in the press. When I heard he was involving Tamra in the case I immediately texted her. The reason for the text was because I had just seen her two weeks prior at the Virgin America event. I once again believed her when she said she wanted to call a truce and she would no longer talk about me. She claimed she just wanted all this to be over. . .”