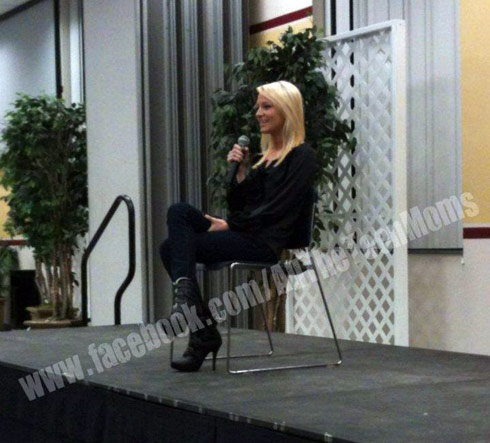 Teen Mom star Maci Bookout was at Kennesaw State University just north of Atlanta Thursday night to lecture about her life experiences both as a young single mother as well as a reality star. She talked about what it was like giving birth at such a young age, gave some updates on how Bentley is doing, offered up her opinions on her Teen Mom co-stars, and even skirted around the issue of how much they get paid:

“I’m not really supposed to talk about it, but I still have the normal struggles, like I have to budget and pay my bills,” Maci said. She then explained that she enjoys doing the show because she hopes sharing her story will help others in a similar situation avoid some of the mistakes that she has made. “But, I am not going to put my entire world on camera for the entire world to see and judge me and take away my privacy, my family’s privacy, my son’s privacy for free. Nobody works for free. And it is work. Filming literally is exhausting.”

(You can read a little more of what Maci said at The Ashley’s Reality Roundup. It’s a little late and my typing skills are rapidly diminishing. But, if we have any mad typists out there with time to kill feel free to take on the task!)

The lecture seemed to go really well for Maci, and she has received an outpouring of thanks and appreciation on Twitter from those in attendance, to which she responded with gratitude:

Here are the videos in the order they were uploaded by old school new school bootlegger peachykeen717:

Bentley Update and Life on TV:

How It All Got Started:

Time Between Taping and Airing:

Opinion of the Other Teen Moms: