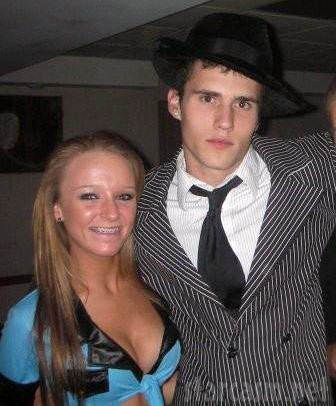 Maci Bookout and Ryan Edwards surprised everyone when they were spotted hanging out at a local club over the weekend. While Maci has been single for months, Ryan was fresh off his break-up from long-time girlfriend Dalis Connell just one week prior, not to mention the former couple’s seemingly irreconcilable differences we all saw on screen for four seasons. Now it appears as though Ryan may be serious about a reconciliation — real serious. So serious in fact that he popped the question on Twitter last night!

At exactly 10:33 pm, Ryan took to his Twitter account and wrote a message to Maci which read, “Marry Me!” Of course Maci thought it had to be some kind of joke and replied, “ur sh*t got hacked BRO! outta ur mind haha,” but Ryan insisted he “would never let happen.” “idk wat that means,” Maci said in response. Ryan then made what he was trying to say perfectly clear, sort of. “Its means that I want to get on one knee an tell you how much I love you,” he explained. 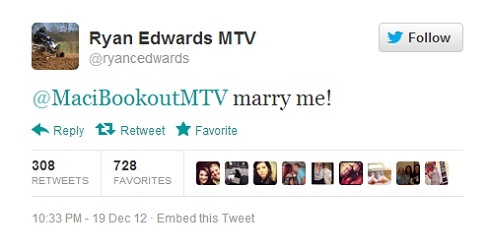 “Twitter is not the place. ima kill u,” Maci later said. His response? “Get in the back.” Then, when a fan tweeted to Maci telling her that she was super confused about what was going on between her and Ryan. Maci replied, “I’ts okay, me too. Awkward.”

Shortly after 1:00 am this morning, Ryan tweeted (to no one in particular), “Never give up on what you believe is right… no matter what gets in the way!!”

So what do you think? Could Ryan be serious about being serious, or was this Twitter exchange just the result of Ryan being funny, a few too many, or a hacker? All I know is that if that rumored Maci Bookout spin-off show is for real, it just got a HUGE ratings boost!