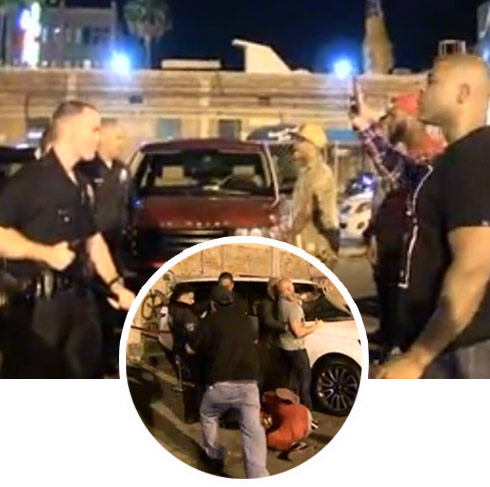 T.I. and The Game found themselves in an intense standoff with police after a brawl erupted outside of a Los Angeles club early this morning.

Sources state that a group of men, said to be “mutual acquaintances” of the artists were denied entrance into the nightspot Supperclub. This led to a verbal altercation between the group denied entry and the club’s security. The situation escalated until one of the members punched a security personnel.

After this all heck broke loose as security came after the group hard as a couple of the members of the posse got beat down viciously by security.

Here’s the clip of some of the insanity. As you would imagine, the scene is violent:

After this brutish tussle T.I. and The Game hustled out of the club and were visibly angered falsely believing that police on hand were the ones who had roughed up their “mutual acquaintances.” It was at this point that an incredibly tense standoff occurred between police, T.I., The Game and friends of the rappers.

By all accounts it looked like things came about as close as they could have to breaking very, very bad:

The 2 men who were injured in the brawl were taken to a hospital but in the aftermath no one wanted to file charges.