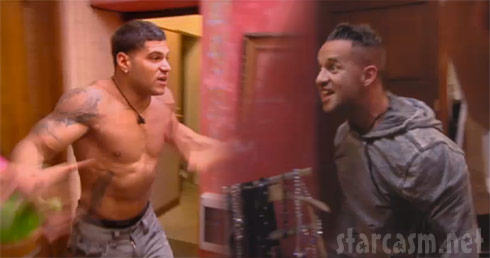 What would a season of Jersey Shore be without some of that charming enraged violence we’ve all come to know and love? In the past we’ve seen Snooki get punched in the face at a bar, Ronnie laid a guy out cold on the street and JWoww went Karate Kid with a backhanded chop on The Situation.

This season two of the guys go at each other as a seemingly rabid Mike “The Situation” Sorrentino and Ronnie “The Roncredible Hulk” Ortiz-Magro bring the WWE to Italy in a serious apartment brawl that had the production crew scurrying and the gals crying! Here’s a preview clip offered up by MTV that includes more than they showed in the episode earlier tonight. The rest of the fight will be shown in a special episode of Jersey Shore to be aired Sunday Night in conjunction with the 2011 MTV Video Music Awards – we’ll keep an eye out for an embeddable version of the full clip and add it when we find it! (Feel free to drop us a line in the comments section if you see it on Youtube or MTV!)

Whoah! I have to admit – I didn’t know the Sitch had it in him! I could have imagined him calling out Vinny or Pauly, but to go after the beast Ronnie… Wow. Maybe dude was jacked up on coke or something? 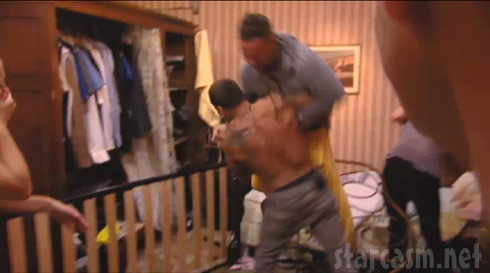 We did a post a couple months ago about The Situation taking a trip to the hospital after reportedly getting into a row with Ronnie, so I assume this is the that situation.

So what do you think about the altercation? Horrific example of immature adults resorting to explosive violence or just Jersey Shore‘s version of “boys will be boys?”