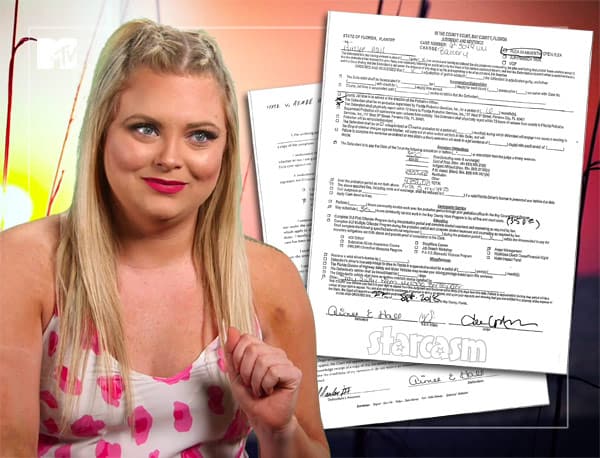 It looks like Floribama Shore star Aimee Hall will avoid a jury trial in her criminal battery case stemming from a physical altercation at a Panama City Beach bar back in May, as she has entered a plea of no contest.

Aimee officially entered the no contest plea on Thursday. As a result, she was sentenced to six months of probation. In addition, Aimee must pay $4,307.08 in restitution and either pay a $400 fine or serve 35 hours of community service.

In case you missed it, Aimee was charged with battery after an altercation at Ms. Newby’s bar early in the AM on May 16. There are varying accounts of what led to the fight, but they all seem to agree that Aimee wound up punching a woman named Melissa Bensinger after Melissa reportedly expressed to Aimee that she thought the show made Panama City Beach look “ratchet.”

In addition to the criminal case against Aimee, Melissa Bensinger has also filed a civil suit against the reality star and show producers 495 Productions. The civil case is still ongoing; the defense team filed a notice of intent to serve a subpoena duces tecum to Ms. Newby’s on Wednesday. The defense is demanding that the bar turn over any and all security video footage from the night of the incident.

If you’re curious about how Aimee’s no contest plea might affect her civil case, I did a little research, and discovered that Aimee’s plea took advantage of a relatively unique Florida statute that allows the adjudication of guilt to be withheld. Essentially, in the state of Florida, a judge can elect to “withhold adjudication” when a defendant is sentenced to probation. If the defendant completes his or her probation without incident, the charge can then be dropped without the defendant having any record of a conviction.

That may sound great for Aimee in regards to her civil case, as she will have no official battery conviction for the incident. However, civil attorneys in Florida have adapted to the statute. “In response to these changes,” the Florida Bar Journal points out, “many civil practitioners have modified the traditional discovery demands through the inclusion of questions regarding arrests, participation in diversionary programs, and pleas of guilty or no contest.”

The Florida Bar Journal goes on to explain some of the things civil litigators need to be aware of when trying to incorporate a criminal case in which adjudication was withheld:

Civil practitioners need to be aware of what is admissible and proper to accurately phrase and answer discovery demands and deposition questions. They must also analyze prior withheld sentences to determine if the underlying facts are admissible as evidence. For example, even though a withhold of adjudication may not be admissible as impeachment evidence of a conviction under F.S. §90.610, there may be a sufficient basis to admit the evidence as character evidence of other crimes, wrongs, or acts under F.S. §90.404(2). A little time reviewing the rules of evidence may make the difference between a line of inadmissible testimony as opposed to a masterfully crafted line of damaging evidence.

I’m no legal expert, but I am certainly more than qualified to be on a jury, and if I was part of a civil trial in which the defendant did not plead innocent to the crime in the civil case, I would be a little leery. I would be especially suspicious of Aimee’s countersuit claiming that Melissa Bensinger was actually the one at fault and seeking damages from her.

Additionally, I’ll point out that it’s not clear exactly what Aimee’s $4,307.08 restitution payment is for. Is the money to cover Melissa Bensinger’s medical and legal bills? If so, then perhaps it will be enough for Ms. Bensinger to withdraw her civil suit?

(On a side note, I confess I’m a little disappointed that we are even less likely to ever see a Floribama Shore jury trial in Bay County, Florida. I can just imagine all of the video that would be played for the jury — and their reactions — not to mention seeing Aimee, Nilsa, Kortni and Candice all testify! [That was the defense team’s witness list, in addition to one other woman with a Panama City Beach address.])