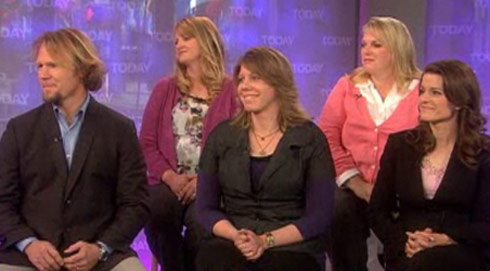 The premiere for the second season of the controversial and engrossing polygamy themed reality show Sister Wives is set for March 13th.  Patriarch Kody Brown and his now four wives, Meri, Janelle, Christine and Robyn have been hitting the news cycle to discuss the changes in their lives since the popular premiere season.

Topics included the investigations of bigamy in Idaho and Kody’s courtship and marriage to 4th wife Robyn.  Our first clip is from ABC’s Nightline.

When asked about the criminal investigation Kody stated that:

“When you ask the question my hearts start pounding in my chest and I get nervous.”

Brown added when asked about how he and his wives helped his children cope with the consequences of their decision to go public that they used, “Positive mental attitude.”

That certainly sounds like the strange, endlessly exuberant master of multitasking Kody we came to know during season one of Sister Wives.  I go back and forth on my opinion of him and his motivations.  Is he seeking fame and money with the show?  Does he genuinely want to be a trailblazer for the polygamist lifestyle in hopes of enlightening America to how families who’ve made that decision our much like the ones we’re familiar with?  I think the answer is somewhere in between and its this dynamic that I find so interesting about The Browns.

While The Browns visited New York they also sat in with Ann Curry on Today fielding many of the same questions.  Here is that clip:

When Ann asked Kody about the incorporation of 4th wife Robyn and her three children into the family Kody had this to say:

When asked about the possible addition of any more wives Kody added that, “Four is enough, but ask me ten years from now.”

During the piece an image was posted of the wives and all 16 children.  It’s a little grainy but I wanted to post it anyway just because it really does put into focus what a massive operation just the day to day lives of this unique American family must be: 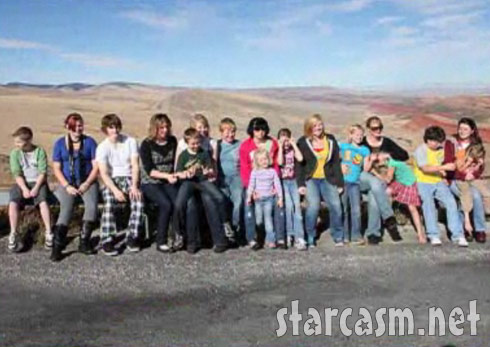 For a handy who dat reference for the Browns check out our great Brown Family Tree graphic here.

They say what happens in Vegas stays in Vegas but we’re going to get a glimpse at whatever happens to this family while in sin city and I for one am hooked.