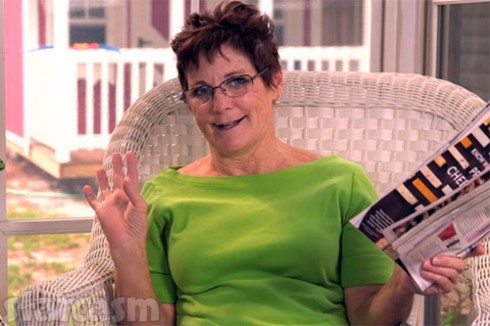 There is no denying that Teen Mom 2‘s Barbara Evans is a goldmine of awesome, New England-accented quotes. Finally recognizing that, MTV did something they should have started years ago and should continue to do on a regular basis: Ask Babs for her thoughts on random topics!

In a new series of clips titled “Babs Breaks It Down,” Jenelle’s mom weighs in on Zayn Malik leaving One Direction, vegetarians, her upcoming trip to the VMAs and more. All of the videos are available on MTV’s website. Here are some highlights…

Nathan Griffith: Nathan was quite the gentleman when he came the first time. Huh! Was I fooled… He’s a user and what he wants is all about Nathan… He’s just so into himself. He’s just a pretty boy… He talked her into having Kai. You know he said, (*mock Nathan voice*) “Let’s have a baby.” Let’s have a baby?! Oh my god! She just had an abortion from her ex-husband, Courtland… I can’t even be around him. He’s like an A-1 a**hole.

Politics: I’m very interested in the upcoming election because the political system in this country is like gone to Hell… Oh, Donald Trump is wild, man. I think he’s good and you know what I think? I think he’s just giving the Republicans a run for their money… Donald Trump is the real deal, man, but I wouldn’t vote for him for president… I love Hillary Clinton. I really hope she gets president because I really think that, you know, there should be a woman president. We need a country run by a woman… Things would get done. Oh yeah.

Vegetarians: I think some people become vegetarians because it’s like (*stuck-up imitation*) the thing to do. It’s like, “Let’s be a vegetarian. I’m vegan…” Don’t come to my Walmart because you won’t be a vegan then… To me, I have to eat meat. I have to have a little meat in my mouth.

The VMAs: Jenelle made a little phone call there to L.A. and I’m invited now and I’m so excited to go.

Farrah Abraham: You know, I can’t believe that Farrah did a porno flick. I just can’t believe it. In fact, when she did it, you know, Jenelle sent me the link right away before it was taking off the Internet. But it is like totally, to me, disgusting. Disgusting! And now she has a sex toy line. Oh my god! I couldn’t believe it. One of the security guards when we were filming one day showed me a picture of it. O-M-G… I just found it was a toy line, so I went into Walmart and I told everybody it was her actual who-ha thing… I spread that whole rumor around town! Ahahah! Sucks to be you, Farrah.

Gluten: You know everyone wants to be gluten freeee… Actually, you need some kind of gluten in your diet. I don’t care about that. I eat anything imaginable there is. I eat all the time… I never gain weight all my life and I’ll just eat what I can until they tell me I can’t eat no more.

Dating: I don’t date anymore. You know, been there done that… If I meet somebody, fine. But I want somebody with a boat. You know, take me on the boat, wine me, dine me, go home. That’s all I need. That would work… I think it’s better that, you know, you make them wait… I don’t think it’s a good thing to kiss on the first date.

Plastic surgery: You know everybody these days is getting plastic surgery, right? To me, you know, I would love to look like I’m 20 again, but let’s be real… You might have a 20-year-old face, but look at their neck, man. They’re like 80. Then they wear all these turtle necks, but if you just took their clothes off, they’d be walking around all decrepit looking… You think a guy is going to love you more because you have a perfect face? It’s not what’s on the outside. It’s always what’s on the inside that counts.

Catch more of Babs’ insights on Teen Mom 2, airing on MTV on Thursdays at 10/9c.