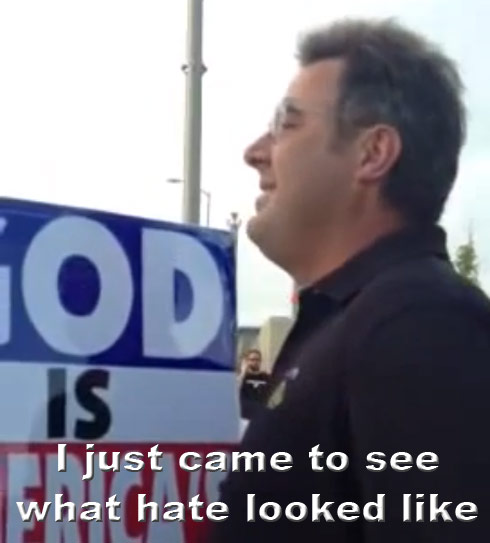 Before Vince Gill’s scheduled concert at the Kauffman Center for the Performing Arts in Kansas City, Missouri on Sunday, he decided he take a stroll outside to visit the Westboro Baptist morons protesting his show to see, as he put it, “what hate looked like.”

The endlessly protesting protesters of the WBC were out hating on Vince because he’s been divorced and remarried.

The confrontation between one of the most well-respected performers in country music and the sign-wielding idiots was caught on video and uploaded to YouTube for all of the world to enjoy.

Please note that during the following undressing of these windbags by Gill, he uses some words that aren’t family friendly but in this instance certainly appropriate:

Westboro lady: “Vince Gill, what in the world are you doing out here?”

Gill: “I just came to see what hate looked like.”

Westboro lady: “What are you doing with another man’s wife? Don’t you know that divorce plus remarriage equals adultery?”

Gill: “Don’t you know you fu**ers are lucky that you don’t have a sign that says something about my wife?. You know what else he [Jesus] said, he said a lot of stuff about forgiveness, about grace and you guys don’t have any of it.

Vince then gestures to a dude holding a sign that reads, “God is America’s terror,” and tells him “I’ve seen you on TV, man. You’re a big dipsh*t.”

The clip closes out with Gill asking, “Are any of you Phelpses (the family that runs Westboro)? Or are you guys like the C-team?”

Here’s Vince with a serious amount of the grace he mentioned above performing his song “Go Rest High On That Mountain,” live at the Grand Ole Opry.