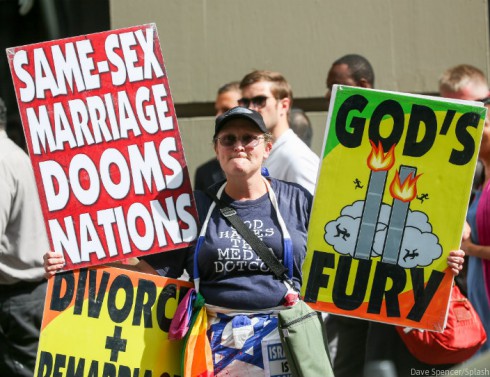 I know it’s a few days late, but here’s something else to be thankful for: The Westboro Baptist Church’s phone lines were clogged up last week when people called their number for advice on a “turkey recall.”

The National Report, a satirical website, fooled many well-meaning consumers last month by publishing an article about turkeys that were being recalled because of Avian Flu fears. A “CDC epidemiologist” said, “The handling, preparation, and eating of these turkeys could infect millions of people during the Thanksgiving holiday.”

The story advised readers to contact the Turkey Safety Hotline to learn more… But, instead, the dialed numbers took concerned consumers to the WBC’s line. According to Addicting Info, this caused the WBC to “receive countless calls, jamming their phone lines, and causing consumers to be frustrated.” (It’s ok — there wasn’t really a recall.)

Allen Montgomery, publisher of The National Report, said the WBC has no grounds to oppose the prank because both the satire website and “church” rely on protection from the First Amendment.