It’s finally here! After much anticipation the first trailer for the Hangover/Hunger Games parody The Hungover Games starring newly crowned B-movie maven Tara Reid, Robert Wagner and Jonathan Silverman (along with appearances by Hank Baskett, Bruce Jenner, Kyle Richards, Camille Grammer and Brandi Glanville among others) has been released!

In the clip we can see that The Hungover Games doesn’t just poke fun at The Hangover and The Hunger Games, it uses the “Districts” structure to parody everything from Django Unchained to Ted to pretty much every role Johnny Depp has played in the last ten years! 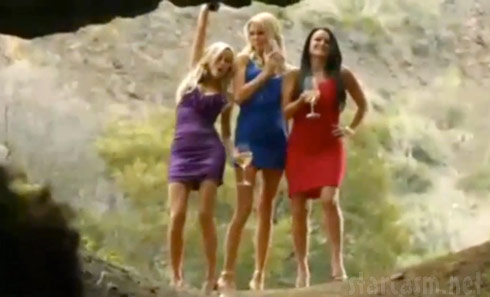 Also highlighted in the trailer are “The Real Housewives of District 8” including the afore-mentioned Kyle Richards, Camille Grammer and Brandi Glanville (above). We broke the story that the ladies would be appearing in the film waaaaaaaay back in February, and later updated with some photos from the set — and now we finally get to see them in action! 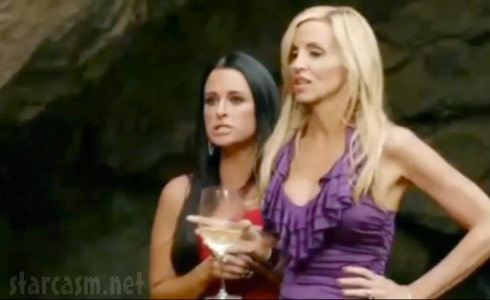 Oh man — seeing Kyle Richards and Camille Grammer together again makes me so nostalgic. 🙁 Come back Camille! Come Back! 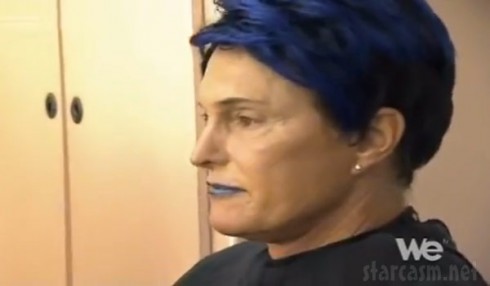 Meanwhile, Kendra Wilkinson’s husband Hank Baskett and Kris Jenner’s husband (at least for now) Bruce Jenner flirt with full-on drag as they play flamboyant hosts of The Games. Hank dons a hot pink ‘fro while Bruce Jenner, who is allegedly a fan of donning women’s apparel now and then, was sporting blue hair and matching blue lipstick.

Bruce and Hank’s appearance was actually captured for the Kendra On Top reality show and featured in the episode titled “Truce or Dare.”

So far there is no release date for The Hungover Games, or even information on how it will be released. However, it was just announced that Sony Pictures has acquired all media rights to the film from producers Ash R. Shah and Ben Feingold. Here’s the full press release making the announcement: 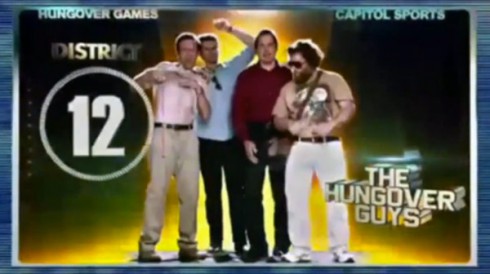 After celebrating Doug’s upcoming wedding in a cut rate hotel in Laughlin, Nevada, our hungover party-ers, Bradley, Ed and Zach, wake up in a strange room in an even stranger world and without their pal, Doug. After meeting the haughty and flighty Effing and the gruff, alcoholic Justmitch, our trio puts the pieces together and realizes that they are on a train car headed to The Hungover Games. But instead of the twelve districts of The Hunger Games, our guys have to go toe to toe against various Pop Culture Districts, including The Superhero District, The Middle Earth District, the Puppet District, and the Johnny Depp District.