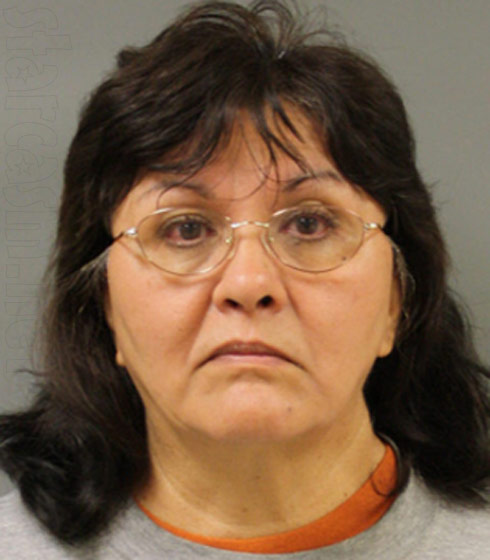 Humble, Texas first grade teacher Irene Stokes (mug shot photo above) is currently denying allegations that she fondled one of her students, and you won’t believe her main argument in her own defense! According to Humble Police Department Detective J. Blanchard, Stokes said she “doesn’t like to even touch the black children on their hand, she shies away when they try to hug her.” In other words, “she admitted to being prejudice,” Blanchard says.

In addition to being prejudice against all black children, it appears Stokes was particularly disdainful of the child in question. According to the court records, Stokes told investigators that she “doesn’t like the student and has little to no interaction with her.”

Here’s a video report from KHOU in Houston:

The alleged incident took place on March 1st at Northwest Preparatory Academy. “The victim said that she was in the classroom alone with the teacher and that the teacher touched her on the outside of her clothes, on what she called her ‘private part,’ her vaginal area,” said Blanchard.

The alleged victim claims that after telling Stokes, 61, to stop touching her, Stokes had her leave the classroom and stand in the hallway — even during lunch and a test, according to court records. It was later confirmed by the child’s mother, who had contacted the school shortly after the incident, that the child did not eat lunch on the day in question.

The girl said when she told her teacher to stop, Irene Stokes, 61, told her to get out of the classroom, according to court records. The girl told investigators that Stokes made her stand out in the hallway outside of the class and then refused to allow her to eat lunch or take a test.

“The employee involved was immediately placed on administrative leave as soon as the complaint was received, and the matter was investigated. As a result of the Academy’s investigation, the staff member in question has been terminated,” a representative for Northwest Preparatory Academy said in a statement Tuesday.

Stokes was released on $10,000 bond and is due back in court for a scheduled appearance on May 21.