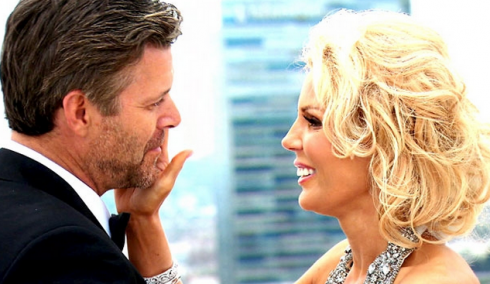 Gretchen Rossi and Slade Smiley are engaged after dating for about three years. The two have been committed for a while now but Gretchen opted on waiting to tie the knot until Slade got his finances in order. Since that’s happened, there’s no holding them back from making things official. So, how did Slade propose?

He didn’t. It was Gretchen who put together the special moment that was caught on tape for The Real Housewives of Orange County.

“She proposed to him on top of the AT&T building in LA,” a source close to the couple reveals to In Touch. “She had him flown up there via helicopter for the dramatic proposal.”

Gretchen had previously revealed to press that she was open to being the one to propose. “A guy doesn’t always have to do it [propose],” she said. “He can still do it, but maybe I might too. If he doesn’t do something soon, I might have to!” It sounds like Slade may have been dragging his feet but Gretchen is a woman who knows what she wants and when she wants it so it’s not surprising to hear that she did the honors.

According to the source, fans have a big treat in store — the proposal will be shown during a future episode of The Real Housewives of Orange County.

This marriage will be the second for Slade (he has son Gavin with first wife Rose Smiley in the ’80s) and the second for Gretchen who married Chris Rossi in 2003 but divorced in 2007. Slade also has a 12-year-old son Grayson with ex-girlfriend Michelle Arroyo who was diagnosed with brain cancer when he was five, and is still undergoing treatment. He underwent a “debulking” surgery last August. If you want to donate to Grayson’s medical fund, go to his website to find out more.

Gretchen has been talking about wanting children for a while, so we may be seeing a pregnant Gretchen soon. Congratulations to them both!

UPDATE: Regarding his big news, Slade tells Starcasm, “It was an amazing day and we couldn’t be happier.”

“So excited to finally confirm that the Engagement Rumors are indeed true!!! I am so happy to have found the most amazing, loving, and wonderful man! God has truly blessed me with him and the love we share! I cannot say thank you enough for the outpour of messages and support from everyone this past week and am looking forward to this new chapter in our lives! Love you Guys!

Be sure to tune in to RHOC later this season to see all the fun details of our special day!”

And here’s a video report from E! News with photos of Gretchen Rossi’s engagement ring: