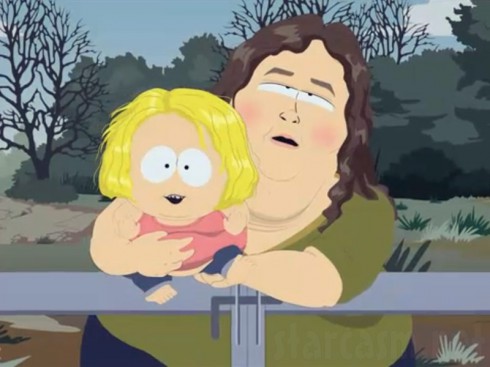 The episode is titled “Raising the Bar” and it was summarized in a press release by Comedy Central:

NEW YORK, October 1, 2012 – Cartman becomes yet another obese person who gets a mobility scooter. in an all-new episode of “South Park” titled, “RAISING THE BAR,” premiering Wednesday, October 3 at 10:00 p.m. ET/PT on Comedy Central.

Cartman owns up to being fat and decides that driving around on a scooter is his right. Kyle sees that Cartman isn’t the only one who finds no shame in his unhealthy lifestyle. Meanwhile, Cartman discovers he has a rival in America’s Sweetheart, Honey Boo Boo.

Here’s a brief preview clip in which Honey Boo Boo and her “Mama June” are shopping for “a hog with pizzazz,” an obvious reference to Alana’s pet pig Glitzy:

Meh. That was kind of disappointing.

And here’s another where Cartman’s “pal” Kyle tries to make him realize what being unconcerned with his weight is going to mean for his future: