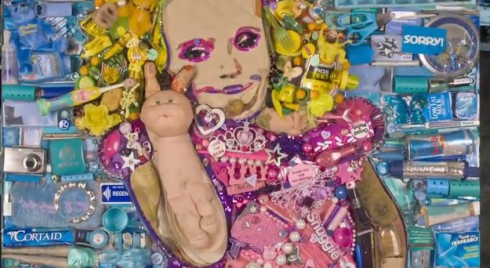 Johnny Depp admits to being a Honey Boo Boo fan, even though it scares him a little bit. “I’m a little frightened of the show,” he revealed on Extra while promoting The Lone Ranger. “That’s the thing… they’re probably great people, but there are bits that happen that just I am mesmerized by.” This wasn’t just a one-time Honey Boo Boo mention, Depp also told The Rolling Stone that he’s a “Honey Boo Boo man.”

Johnny’s not alone in his HBB addiction, below are more high profile celebs who can’t get enough of Alana Thompson, Mama June, Sugar Bear, and the rest of this eccentric Georgia family. 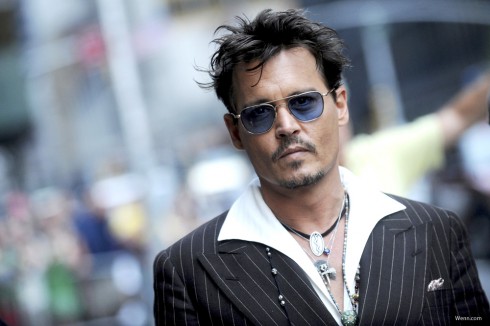 Bristol Palin: “I’m a Honey Boo Boo fan, definitely,” she told Inside Edition. “More power to her for having such a successful show.”

Anderson Cooper: He’s had Honey Boo Boo and her mom on his daytime talk show several times and always treats them with affection. He even has Honey Boo Boo cutout in his office: 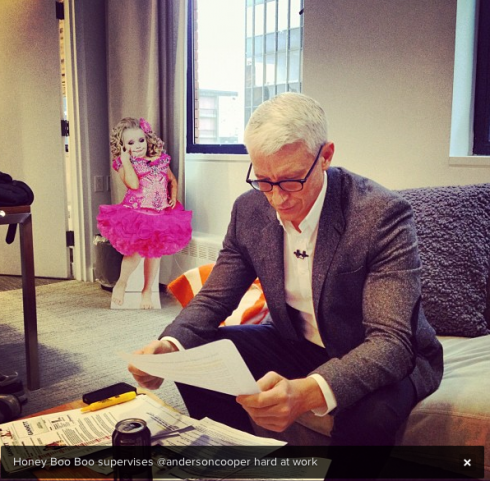 Rosie O’Donnell: Rosie was so impressed with this family that she wanted to buy them a new house. “I think that little girl, Honey Boo Boo, she is like Shirley Temple,” O’Donnell told People. “She has a presence and an intellect that goes way beyond her years.” 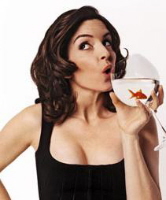 Tina Fey: While writing the last season of 30 Rock, Tina and her staff couldn’t get enough Honey Boo Boo. “[E]very day at lunch our writers take a little break and watch a TV show and most times it’s ‘Honey Boo Boo’ or ‘Breaking Amish’ …” she said.

Jwoww: Jenni “Jwoww” Farley told HuffPost TV “I would love to meet her. I’ve been a fan of hers since ‘Toddlers & Tiaras.’ I just think that her family is amazing. The mom is like the ultimate mom and they have a lifestyle like ours — it’s completely different, only some people get it, but at the end of the day, we’re all a huge, loving family and same with her family. Her mother is all about her kids and just loves them and even though they’re different and act crazy like we do, they only have love for the world. So I wish them the best and I hope they’re very successful because they deserve it. They are very entertaining.” 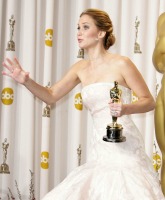 Jennifer Lawrence: Jennifer is such a Honey Boo Boo fan that she got into a car accident because she thought she drove by Honey Boo Boo. It was actually a breast cancer parade where they had “boobs” written on a sign. “I thought it was saying, ‘Boo Boo,'” Lawrence told Jay Leno on The Tonight Show. “So I was like, ‘Well, does that mean there’s Honey Boo Boo?’ So I started craning my neck and then I saw a little girl.” Lawrence’ lack of attention to her driving caused her to rear-end the car in front of her.

She has a message for that people she ran into: “I’m sorry that I hit your family. I thought I saw Honey Boo Boo!”

Britney Spears and Ke$ha: These two pop princesses Tweeted to each other using Honey Boo Boo references, proving they are up on their Honey Boo Boo lingo.

Rebel Wilson: This Australian comedian watches Here Comes Honey Boo Boo and other reality shows to learn how to speak with an American accent. Rebel told Conan O’Brien that she sits in front of the TV repeating after the reality stars.

Jennifer Lawrence says she’s obese by Hollywood standards, will never starve herself for a role