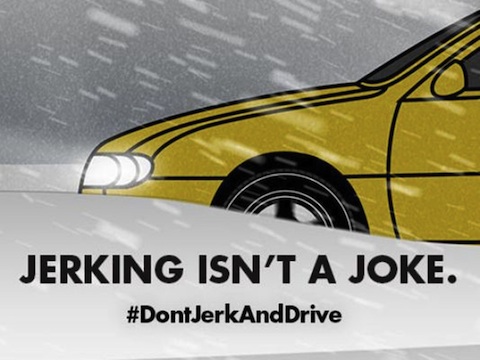 If you feel like you somehow woke up on April 1st today, take comfort in the fact that you’re probably not alone.

South Dakota, whose mottos are “Under God the People Rule” and “Keep Those Hands at 10 and 2, Mister,” has just ended its statewide “Don’t Jerk and Drive” anti-masturbation-and-driving campaign.

Well–not quite. The state recently declared war on jerking–meaning overcorrecting at the steering wheel–given that we are in the thick of an especially icy late autumn, and South Dakota is a state known for poor driving conditions.

So, the slogan the Department of Public Safety came up with was “Don’t Jerk and Drive.” Which, according to DPS Secretary Trevor Jones, was an intentional double entendre.

But Jones said the department would pull the ad–quickly–because “[it] is an important safety message and I don’t want this innuendo to distract from our goal to save lives on the road.”

Added Highway Safety Director Lee Axdahl, “The message [now] is that we’d prefer drivers keep their cars out of the ditch and their minds out of the gutter.”

The Rapid City Journal reports that more than 30,000 people visited the Department’s web site this week, meaning “Don’t Jerk and Drive” outperformed previous safety campaigns by about 25 to 1.

And the Minneapolis Star Tribune comes up big with this tidbit: Some of the other slogans considered for the campaign were “Jerking isn’t a joke” and “Think before you jerk.”

Check the video below. And remember, people: You don’t want to yank the wheel aggressively; just ease off of the gas and move slow and steady. That’s the way to safe driving. And to good, largely clean fun.