Forget The Avengers and Prometheus, the most anticipated film release of 2012 is the softcore adult film Octomom: Home Alone starring the greatest multiplier since Rain Man, Nadya Suleman. While we have to wait until June 20 for the Full Nadya, Wicked.com has released the first official preview trailer for the film!

Viewers be warned: Although the clip is technically SFW, there is some rather sensual mammary rubbing as well as Nadya making sexy faces…

(What’s up with the Inception music? Perhaps it’s a too-clever reference to “conception?”)

Here’s a still image from the trailer in which you can see some very attractive strawberries: 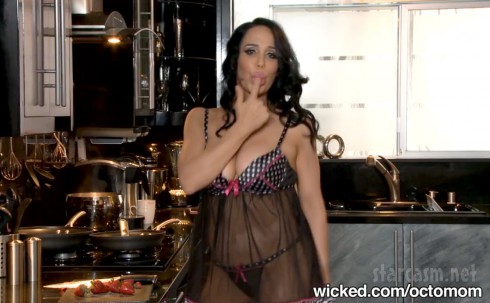 On a side note, let’s all take a moment to remember women getting their fifteen minutes of fame have a lot more options, however undesirable, than their male counterparts. Regardless of morality, Jon Gosselin simply doesn’t have the option of making money by getting naked and rubbing himself in front of a video camera.