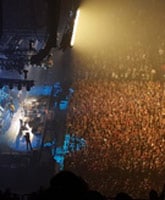 During last night's concert in Tulsa, Oklahoma, Mumford and Sons rolled out a rollicking version of "Okie From Muskogee" in tribute to Merle Haggard following the news of his passing at age 79. The band, joined by opening act Blake Mills, lit into the late country legend's hit and the crowd, as expected, collectively lost their minds. Tweets came rolling in from fans in appreciation of the nod to the most talented singer in country music history.
Read More...
Read More...
Read More...
We use cookies to ensure that we give you the best experience on our website. If you continue to use this site we will assume that you are happy with it.OkNoPrivacy policy