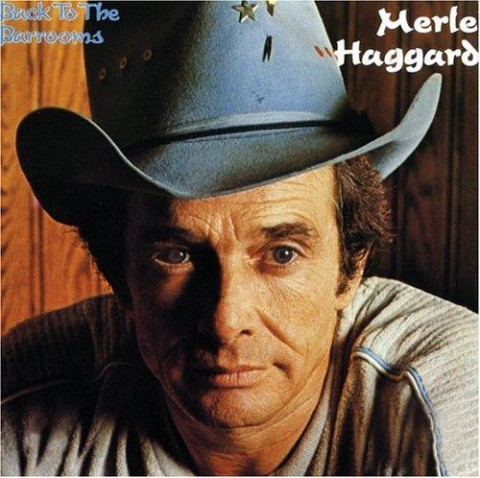 30 years ago country music legend Merle Haggard released Back to the Barrooms right on the heels of The Way I Am. The album’s theme of loss, imbued with a going down to hell drinking attitude, have stood the test of time, leaving in its wake a generation of musicians and fans in awe of the masterpiece from the man they call “The Hag”.

The cover of the album sets the tone as you see Haggard with a failed smirk and a tilted blue suede ten-gallon hat.  He looks as if he’s propped up on a barstool, shoulders hunkered forward with the wood panel wall behind him only accentuating the feel. The shot is tight, focusing on the lines in his face and the age and weariness in his eyes.

So how would one go about setting up the greatest drinking album ever made? How about the opening track, Misery and Gin, which was used for Clint Eastwood’s film Bronco Billy.

“Memories and drinks don’t mix too well. Jukebox records don’t play those wedding bells.  Looking at the world through the bottom of a glass. All I see is a man who’s fading fast.”

The piano lopes along sounding like that walk of shame from the parking lot to the bar stool that might as well have your name on it. Haggard’s voice is way up on the mix, as a pedal steel joins in emulating the tears the singer is keeping inside. Within the first verse a setting is laid out that’s the foundation for the whole album. You are, to steal a Haggard line, going where the lonely go. It’s a beautiful piece of work and one of Haggard’s finest openers.

Drinkin’ songs are a country music staple, so much so that they’re a perceived cliche. Just like any topic in songwriting there’s been a handful of classics about drowning out sorrows and a million poor imitations. So, in this massive arena it would seem damn near impossible for four of the top say twenty drinking songs ever recorded to be on one album, but here they are all sequenced out just right in this wood paneled honky tonk heaven that causes our narrator to feel like hell.

The drinking songs in question are the aforementioned “Misery and Gin,” as well as “I Don’t Want to Sober Up Tonight,” “I Think I’ll Just Stay Here and Drink”  and the title track “Back to the Barrooms.”

While Barrooms can be summed up rightfully as a drinking album it’s really about what a middle aged man who’s made some pretty bad decisions sees in the mirror. So often I relate to the man in these songs while at the same time I know I don’t want to be him. These are warnings from Merle, or at least I hear them that way.  He’s telling me to fly straight and be good to my gal, that a wondering eye may cause me to fall out of love with guitar and blow all my chances at being a big singing star-as he sings in what I would argue is his most under appreciated song, “Make Up and Faded Blue Jeans.”

All of the songs are consistently brilliant and filler free, an extremely rare trait for a country music album.  Pop in Barrooms and you can just rip out the skip button and toss it out your truck window down into Kern River.

Perhaps the most incredible, if not implausible fact about Barrooms, is that it has only been available for purchase on CD approximately 8 of the last 25 years!  For too long a time it was out of print until MCA reissued it as a double-album along with its same year predecessor The Way I Am. This record sounds and feels like a greatest hits package and a Hag fan couldn’t even get a copy. Now someone out there try to convince me that the music “industry” isn’t out of its fool mind!?!

Anyways, other highlights from the album include one of Merle’s very best recorded vocal performances for “Ever-Changing Woman” and a unique and beautiful Haggard penned tribute to his friend Tommy Collins called “Leonard.”

The album closes with our barstool-bound friend resigned to his fate, full of not only cheap beer but piss and vinegar as he lets his unraveling become his battle cry. Here’s Merle with his classic “I Think I’ll Just Stay Here and Drink.”

There’s 30 years on Barrooms now and while the bottoms up and bottomed out narrator in the grooves shows his age the album’s still just a young whipper snapper. It’s a record that demands to be heard and has got to scare the hell out of any young country artist who decides, “I’m gonna write the best drinking album ever.” Sorry buckaroo, that crown’s forever taken.

Music Review: Landon Pigg’s “The Boy Who Never” – Plus watch Falling in Love at a Coffee Shop Video