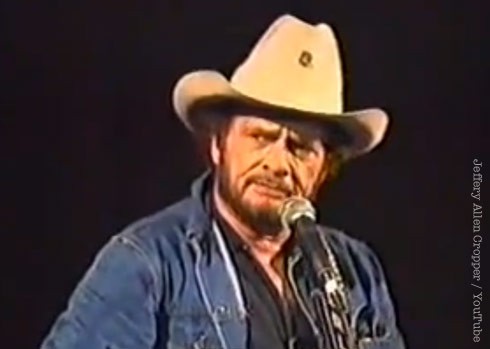 An astounding live clip by country music icon Merle Haggard of a song he wrote for friend and fellow star Johnny Paycheck has emerged online. This is believed to be the only known performance of the cut entitled “From Inside the Walls.”

One of the most legendary and circulated stories in the history of country music involves Merle Haggard, Johnny Cash and San Quentin. Cash performed at the maximum-security California penitentiary and in the crowd, under incarceration for robbery, was a 20-year-old Haggard.

Merle has credited that performance with helping him to turn around his life and seek out a future in the music business. Merle said of Johnny, “He had the right attitude. He chewed gum, looked arrogant and flipped the bird to the guards — he did everything the prisoners wanted to do. He was a mean mother from the South who was there because he loved us. When he walked away, everyone in that place had become a Johnny Cash fan.”

Many years later Merle looked to do another legendary artist a favor when he agreed to appear at a special concert by Johnny Paycheck to be filmed and recorded live at Chillicothe State Prison in Ohio. Paycheck, who passed away in 2003, was behind bars at the facility for a barroom fight that broke bad when the “Take This Job and Shove It” singer pulled out a pistol and fired it, grazing his opponent.

Merle made the trip and the show featuring Johnny Paycheck, performing for his fellow inmates, actually happened. Tragically the footage never saw the light of day as the project was shelved by Executive Producer and fellow country music legend Hank Cochran.

Producer, singer and songwriter Billy Don Burns talked in detail about the lost Paycheck performance in a fascinating post shared by TakeCountryBack.com:

“I know that this was one of the greatest events ever captured in recording history. I don’t even know why it was me that was chosen to capture it, but it was me. It seemed like everyone in the industry was offended I did the project. It was like “who is this guy? Hell, he don’t deserve a project of this magnitude.”

The special was to be called Inside the Walls, and it got its name from a song Haggard penned, at Paycheck’s request, for the show.

Thanks to hardcore Paycheck fan, Jeffery Allen Cropper, this believed to be one and only performance of “From Inside the Walls” has found its freedom so to speak via YouTube. Cropper was kind enough to share this terrific footage of a tune that stands beside many of Haggard’s timeless prison-themed songs.

Merle Haggard “From Inside the Walls” Chillicothe State Prison 6.13.1989:

Merle Haggard “From Inside the Walls” lyrics:

There are two other clips from the performance circulating online including a great duet by Paycheck and Haggard of Whitey Shafer’s “I’ll Break Out Again Tonight” (also shared by Cropper) and the rowdy opener “I’m The Only Hell (Momma Ever Raised).”

It’s hard to imagine that this show is sitting on a shelf somewhere collecting dust. From what’s been shared this is a recording begging to be released. You can get a great idea of what that would look like via the official website of Eric James – who was the production director for the event.