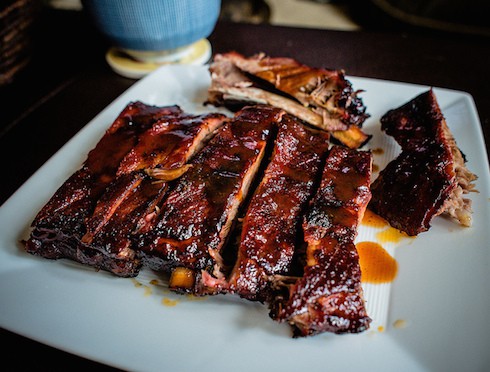 A California man has drawn praise from some and ire from others after he bucked common sense and ran back into the burning building from which he’d just escaped in order to save a rack of ribs.

To his credit, Robert Wright, of Fresno, first made sure that his wife and children were completely safe. Wright snapped to immediate attention after he noticed his neighbor’s apartment had caught fire, and worked quickly to evacuate his family and notify further neighbors of the imminent danger.

Even during his brave exploits, though, Wright found his attention kept returning to one thing: the rack of ribs he had cooking in his own kitchen.

“It’s like three o’clock in the morning; I was hungry, man,” Wright said, in an adrenaline-fueled interview  following the incident. “Put the ribs on there, man, some hot links and stuff. We got it going and stuff, but I looked over, the fire was bursting out. Like, man, this is crazy, man.…It was frantic.”

“Only thing I think first, man,” Wright said, “make sure them ribs is right.”

“I got kids, man,” a clearly hopped-up and breathless Wright went on; “[that’s the] first thing I got. [Then] I thought about my ribs, like, I didn’t want to let my ribs burn and stuff.”

Said Fresno Fire Department spokesman Pete Martinez, “From what we could tell, the rib guy had no responsibility in the fire. He just happened to be cooking ribs at the time, which is phenomenal.”

While Martinez was happy that Wright emerged unscathed–and with his ribs–he was quick to caution against running into burning buildings for any reason.

“Nothing is worth losing your life over,” said Martinez. “No matter how delicious those ribs are, you can make ‘em again.”

(Photo credits: Fire one, two, rack of ribs via Flickr)

VIDEOS Orange is the New Black Season Three debuts tomorrow: Here are some funny teasers to get you prepared