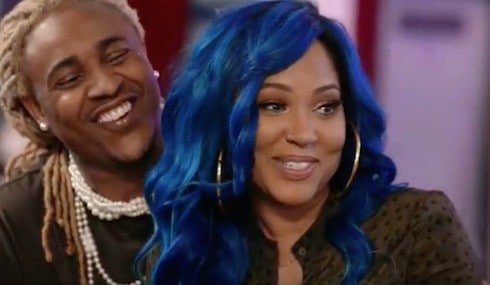 Are Lyrica and A1 already married? It’s possible that the two newest Love & Hip Hop Hollywood stars have actually been a married couple for weeks–if not months–and that a top-secret elopement way back during the LHHH Season 3 filming was the route they chose to take. As Lyrica and A1 explain in a clip from the show, their respective mothers were none too pleased about the couple’s intentions when everyone sat down for dinner. Even Ray J was surprised to hear about what happened when the mothers got wind of their babies’ plans–and Ray J and Princess’ long engagement has known way, way more than its fair share of drama.

In a possibly unrelated twist–but one that’s really fun if you’re looking for a conspiracy theory–Lyrica’s Instagram account was recently wiped clean after hackers got hold of it. At least, that’s the word according to Lyrica herself–

–though many fans appear skeptical about this explanation, and instead wonder whether her Instagram page contained incriminating photos with regard to any possible wedding or elopement the two had, one that hasn’t yet been featured on Love & Hip Hop Hollywood

For good measure, then, here are A1’s two most recent Instagram posts featuring both himself and Lyrica. Note that both shots were uploaded during the period that LHHH Season 3 was being filmed. That aside, there’s for sure no shortage of love between these two:

Who is A1 Bentley, the newest star of Love & Hip Hop Hollywood

(Photo credits: Lyrica and A1 via VH1)