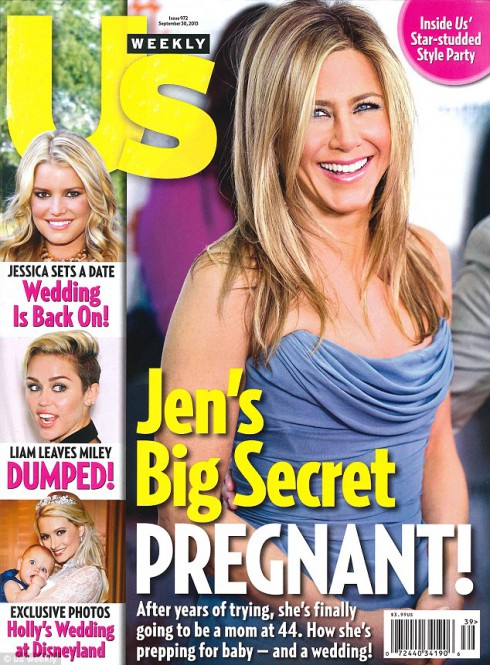 Pregnancy rumors continue to hound Jennifer Aniston, with the latest stork report coming in the form of a cover story on this week’s issue of Us Weekly. “Jen’s Big Secret: PREGNANT!” proclaims the headline, followed by, “After years of trying, she’s finally going to be a mom at 44. How she’s prepping for baby — and a wedding!”

The tabloid includes a denial from Jennifer’s rep in the article, but they march right on ahead with their claim, citing a source who says “She is scared of having a miscarriage, given her age, so they are not saying anything until she is six months along.”

Though there have seemingly been “Jennifer Aniston is pregnant” tabloid stories almost monthly dating all the way back to her days as Rachel on Friends, they recently gained a bit of traction after Jennifer really did appear to have a bit of a baby bump at the We’re the Millers premiere in New York City in August: 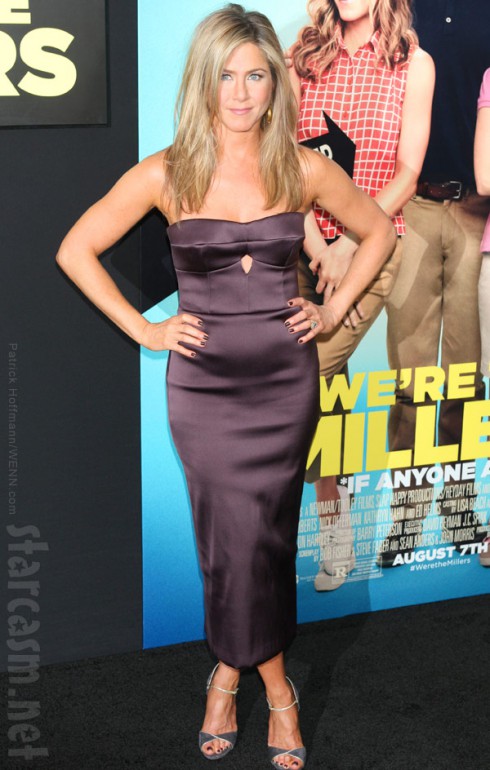 Jennifer laughed off the pregnancy rumors at the time and a couple of weeks later she wore a belly-crunching corset-style dress to the German We’re the Millers premiere, which seemed to be the anti-maternity fashion statement equivalent to the middle finger for the media.

I do have to hand it to Us Weekly, however, because they certainly came prepared! Here is a bullet point list of the magazine’s claims and evidence supporting them:

After wearing the rumor-spawning purple Burberry dress at the New York We’re the Millers premiere, Jennifer’s stylist “had to redo her whole press tour wardrobe.” The source goes on to reveal that Jennifer’s stylist avoided asking designers for outfits in larger sizes for fear of alerting folks that she was gaining weight, and instead bought new dresses by Alexander McQueen and Chanel straight off the rack at clothing stores.

And although Jennifer didn’t look to have a baby bump at the Toronto International Film Festival premiere of her movie Life of Crime on Saturday, the Us Weekly article says the dress Jennifer was wearing had a corset inside with layers of fabric over the stomach.

So what about the photos of Jennifer Aniston in a bikini from her trip to Mexico with fiance Justin Theroux a few weeks ago? Here’s a rough sample: 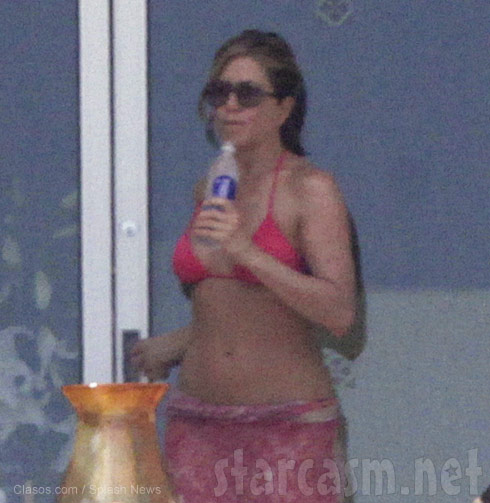 Us Weekly didn’t have quite as good a response to this one, saying that Jennifer constantly tried to hide her stomach with a towel or wrap, which is true for most of the photos, but in the one above you can clearly see her stomach and there certainly doesn’t appear to be a “bump” enough to worry about covering up with corsets and so on.

Here are the rest of Us Weekly‘s diligently compiled arguments supporting their claim that Jennifer Aniston is indeed pregnant, put together by th good folks over at the Daily Mail:

• Sometime in September the pitchwoman canceled a Smartwater photo shoot and said it would be a ‘while’ before she could reschedule.

• She also has no movie projects lined up, which is odd for her because she usually works nonstop.

• The couple has already moved into their new gated $21m Bel-Air home in LA, which at 8,500 square feet has plenty of space for a nursery.

• On September 7 the duo were spotted loading up on groceries for their new kitchen (though most likely not eggs as they have their own chicken coop on their property). Tellingly the Golden Globe darling wore a baby doll dress that completely hid her mid-section.

So what do you think? Is Jennifer pregnant or not? (I’m thinking 83% chance she’s not pregnant — but that’s just me! And besides, that means I’m saying in my mind there’s a 17% chance that she may actually be pregnant!)