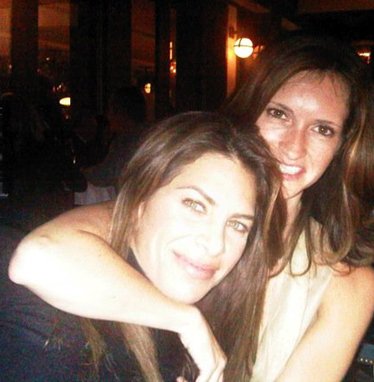 Jillian tweeted on May 23, 2012 “I’m really happy to share that my daughter is finally home & my son was born on 5/3.” She is also featured with Rhoades in this week’s People Magazine gushing about their lives as busy new moms.

The usually tough, no-nonsense 38-year-old former The Biggest Loser trainer also revealed her softer side in the magazine; the reporter witnesses her being cooing, tender, and fawning over her two new children. “Seeing my two kids together is a magical feelings.”

All this sharing is all different for Jillian, who has usually kept pretty private. In 2011 when Jillian left The Biggest Loser, she had plans to adopt a baby from abroad. As she was maneuvering the complicated adoption process, Jillian also fell in love with Heidi Rhoades (who she affectionately calls “Mouse,”) a former music manager. As their relationship progressed, Heidi decided she wanted to try to get pregnant. Jillian once told Women’s Health that she didn’t want to ever get pregnant herself because she said she couldn’t “handle doing that to my body.”

They had one adoption fall completely fall through because the agency wanted the baby boy they were matched with to live in a household with a father. Around that time Heidi found out she was expecting (they didn’t reveal how Heidi was trying to get pregnant.) Soon they also fell in love with baby Lukensia at a Haiti orphanage, and their family finally fell into place.

“I want to be in the moment and enjoy all the nuances of their growth and development. I don’t want to rush any of it. I can’t wait for every day.”

Although they are extremely joyous about their new children, Jillian isn’t thinking about making any new additions any time soon. This new motherhood experience has also given her regrets about things she told mothers on The Biggest Loser:

Not only is Jillian not ready to have any more children, she’s also not open to getting her own reality show about her life with Heidi and the babies. When a fan pitched the idea on Twitter, Jillian responded:
“no way! I already make too many mistakes. God help me if they were on camera.”

Jillian Michaels had a nose job?

Jillian Michaels is almost a mommy

Jillian Michaels on motherhood — “Son of a b***h, this is hard!”