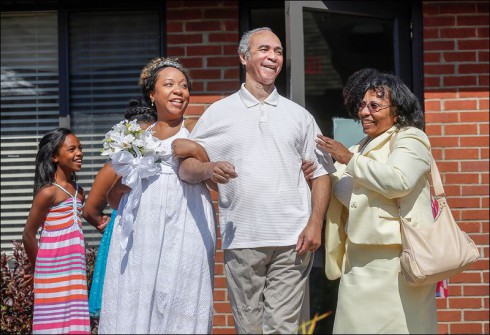 One month ago, Miriam Reeves’ plans to wed fiancé Mark Davis in a traditional ceremony at their Michigan church in August were nearly finalized. Then she realized it simply wouldn’t work for one key reason: Her ailing father isn’t advised to leave his Alzheimer’s care center in Ohio.

“My dad has been my hero my entire life and I know that if he was well, he would be at my wedding front and center. And I thought, ‘Why not move it there and it would be more of a special event,'” Miriam told The Blade.

With her fiancé on-board, Miriam arranged to say her “I dos” at her father’s treatment center. She said the staff was “very excited.” She believed her dad, who was diagnosed with Alzheimer’s dementia in 2006, was also aware of the day’s significance.

“He still knows who we are, but he doesn’t say much and he can’t care for himself. I feel like a part of him will know what’s going on,” she said before the wedding.

Indeed, when Bernard Reeves walked his daughter down the aisle on Saturday, he was beaming.