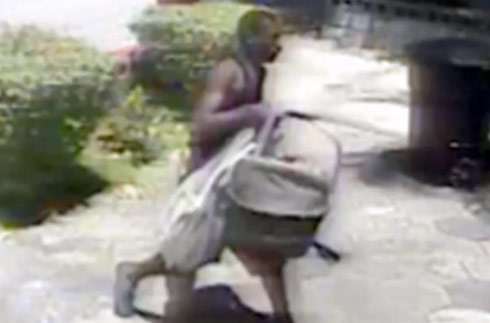 Detectives with the St. Petersburg, Florida Police Department are seeking the public’s assistance in tracking down two male teens who stole a vehicle outside of a church.

A couple that was unloading chairs and tables at the church left their SUV running and unlocked with their 10-month-old baby girl still in her car seat inside the vehicle. It was at this moment that the men jumped in and stole the ride. Thankfully, one of the suspects dropped off the child, still in her car seat, at the front door of a nearby home just minutes later.

The incredible scene was caught on surveillance video which was released by the police:

Here is the official press release as well:

St. Petersburg Police Detectives need help from the public to identify a suspect who stole a vehicle from the parking lot of Gethsemane Missionary Baptist Church located at 2580 12th Avenue South on May 18, 2014 at 2:15 p.m.

The victims were unloading tables and chairs at the church from their 2013 Toyota Highlander. For a brief period of time, they left the Toyota unlocked, the keys in the ignition and their 10 month old baby girl secured in a car seat.

During the approximate five minutes that the victims were inside of the church, two male teens entered the dark gray 2013 Toyota Highlander and drove away. About three minutes later, one of the suspects dropped off the baby on the doorstep of 2022 11th Street South, unharmed and still sitting in her car seat. The owner of the home arrived just after the suspect had fled, found the child and alerted police.

At 7:30 that evening, the Toyota Highlander was recovered in a parking lot at 735 22nd Avenue South.

Can you guess why Texas revoked this custom license plate?