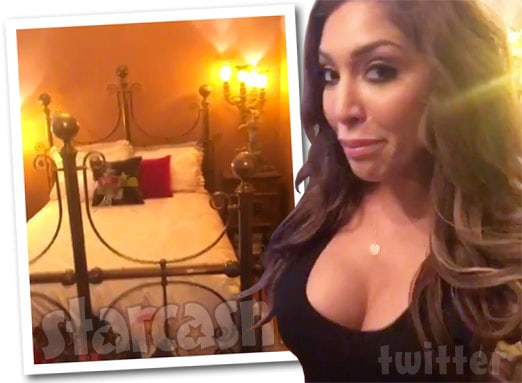 May is here, and we all know what that means: time to post videos showing off where you lost your virginity! Or, at least that appears to be what it means, in the world of Farrah Abraham.

The Teen Mom star is currently back in her hometown of Council Bluffs, Iowa, where her mom, Debra Danielsen, recently moved back into the home featured on Farrah’s episode of 16 & Pregnant and the first few seasons of Teen Mom. (Back before it was OG.) So, in honor of it being May (?), she shared a video of the bed and room where she lost her virginity:

“Hi everyone. Happy month of May,” Farrah begins. “I just wanted to share for the national campaign that May is one of the top months where people lose their virginity or get pregnant. So, I wanted to show you because I had the opportunity to be back in the house that you saw 16 & Pregnant in, Teen Mom — and this is where I lost my virginity.” As the camera pans around to show the bed and the bedroom, Farrah can be heard saying, “Awwwwww!” She continues: “It’s still in its fashion and form! I love it! It’s so darling to me. And that’s where I lost my virginity.” The clip ends with Farrah stating: “Read my book!” She is, of course, referring to her book My Teenage Dream Ended, in which she talks at length about her sex life as a teenager, and her relationship with Sophia’s father Derek Underwood, who died tragically in a car crash in 2008 when he was only 18. You know, perhaps since Debra is once again living in the house, she might consider turning it into a Farrah Abraham living museum — sort of like Graceland, except for someone more famous. Would you pay $15 to see the bed Farrah lost her virginity in?