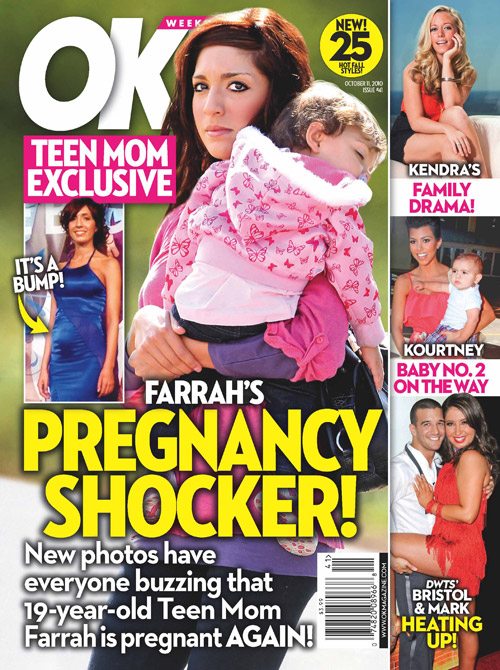 On the cover of the October 11 cover of OK! Weekly magazine is the headline “Farrah’s Pregnancy Shocker” and subheader “New photos have everyone buzzing that 19-year-old Teen Mom Farrah is pregnant AGAIN!”

According to their web site the rumors began after Farrah Abraham participated in a modeling gig in her hometown of Council Bluffs, Iowa on the weekend of September 18. The reality star was wearing a “slinky-blue dress” that revealed a “” which suggested to some she might be pregnant again.

“She looks much rounder in the belly and has been staying in more,” a source tells OK!. “When she does leave the house, she’s started covering up a lot more in baggy clothing, like she’s trying not to show her stomach. That’s not like her at all — she’s normally so proud of her figure.”

UPDATE! Farrah has addressed the pregnancy rumors in a Q&A with MTV’s Remote Control blog. Here’s that phone interview:

Remote Control: So let’s get down to it. Are you pregnant?

Farrah: No, I am not. I have no clue how anyone could think that. I don’t understand where it comes from because I don’t have sex! From the episode that was aired last night, it shows I can’t find a guy, and I don’t have time to date. I’m just not ready to be intimate with someone. It’s a time in my life where I’m just kind of shut down.

Remote Control: What did your mom say when she found out about the rumors?

Farrah: As soon as I told her, she just laughed. She didn’t even question me, which I’m so thankful for. I’ve been working on my parents’ trust for a while.

Remote Control: What about the magazine’s sources that claimed you have a baby bump, and that you’ve been wearing baggy clothes more often?

Farrah: Right before I modeled in the hair show they talked about, I had an allergic reaction to medicine I was taking. I got bloated. None of the women I was modeling with said anything to me about having a bump. I still had a great time [at the show], regardless of my body not being the way I wanted it to be. And the only clothes I’m wearing lately are baggy! They’re sweats for cooking and working out all the time, and going to the park with my daughter. I feel like I have no one to impress. I’m not going to dress up for anybody, I’m comfortable with myself.

Remote Control: And the stuff about you staying home to avoid being seen?

Farrah: I am home a lot because I love being at home with my daughter. I’m also studying. I have a lot to do this [college] quarter, so I can’t be out as much with my friends. I’m just being responsible–it’s where I’m supposed to be right now.

Remote Control: OK, that about does it. Anything else you want to put out there?

Farrah: I am all about helping girls make the right choices in relationships. I definitely would not put myself in that situation again. I just want people to know that I am very knowledgeable about what to do for my life and how to be a good mother, and how to use precautions if I do have sex. I don’t want anyone to be confused about that.

Something important to note here is that this marks the first time the tabloids have taken off the white gloves when dealing with the cast members of Teen Mom. Farrah, Maci, Catelynn and Amber have been featured in numerous tabloid cover stories but all of them so far have been pretty-forward and not the usual speculative and hurtful stuff you see in the supermarket checkout lane. In other words. the attention the girls have received has been mostly positive.

There were interviews with Maci’s boyfriend Ryan and Farrah’s sister-in-law Kassy Underwood, but although those didn’t necessarily show the girls in a favorable light they were straight-up interviews. I’m worried that this baby bump thing is just the first domino to fall in what promises to become an unpleasant avalanche of stories involving alleged cheating, alcohol and he said/she said tabloidegery. (Of course I’ll be right there writing about it all!)