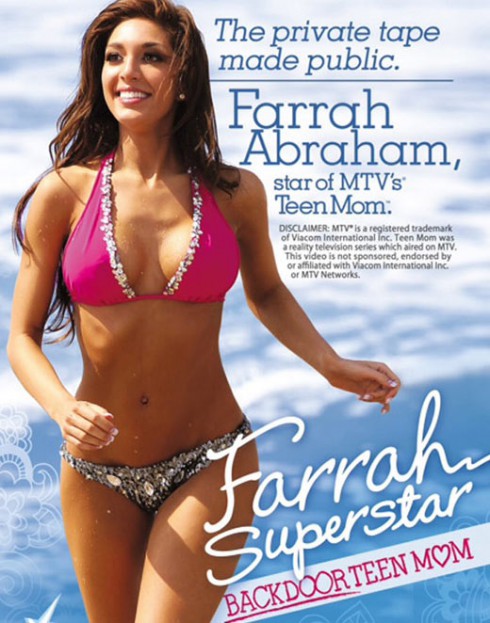 Farrah Abraham has tossed around various numbers when it comes to how much she got paid to release the rights to her {ahem} “private sex tape” with James Deen. TMZ reported that Vivid dropped $1 million, while Farrah later bragged that the number was upwards of $1.5 million. A recent post via FOX411, citing industry insiders, claims that the amount was less, way less.

So how much are they claiming Abraham made off of Farrah Superstar? How about 1/100 of the initial $1 million reported. That’s right, $10,000.

Kevin Blatt, who boasts via his Twitter account that he’s the “world’s only celebrity sex tape broker, and Scandal Specialist,” stated that recent sex tape headline maker Tami Erin, who was once Pippi Longstocking, got the same offer. “Tami Erin was offered $10K up front which is standard for Vivid. It is what they offer every celebrity, not a million dollars.”

When the news of Farrah’s tape(s) was first breaking, Blatt blasted Farrah’s original sex tape, opining that it was like “watching child pornography.” So it’s fair to say his stance on this could be biased but another insider backed Blatt’s claims:

“In reality she (Abraham) got $10,000 upfront and 30 percent of sales, minus the cost of production. The entire celebrity sex video genre is a lot of unsubstantiated marketing with very little truth behind it…. It’s all publicity.  It’s all hype.”

It’s with those back-end sales compensations where the numbers get a little hazy. When Farrah spoke about her deal it could have been based on projected sales and revenue as opposed to an upfront payday. When it became available for streaming, the video crashed Vivid’s site and was reported to have received over 2 million views in the first 12 hours.

The sources for FOX stated that Paris Hilton and Kim Kardashian did make millions for their tapes, but that was back when people were still purchasing adult DVDs in large quantities. Vivid’s Steve Hirsch wouldn’t provide a number for Farrah’s deal, “I think after doing these deals for so many years I know how to properly structure them. We aim for fair deals for all involved and if they weren’t profitable, we wouldn’t be in business for almost 30 years. I’m happy with our track record.”

Jasmine Waltz, who dated Ryan Seacrest and David Arquette, made her own tape and warned of shady dealings from her experience. “Vivid told me they would give $125,000 and 25 percent of the back-end, all the sales that are made. Basically, you’ll never see the back-end after advertisement. You won’t get the money. It’s a very untrustworthy business.”

We’ll probably never know how much Farrah ends up making off of her p0rn but I would guess that the truth lies somewhere in the vast divide between the $1.5 million she’s claimed and the $10,000 and possible bonuses per FOX’s report.

The big question that remains is which side of that scale is Farrah’s profit margin residing?