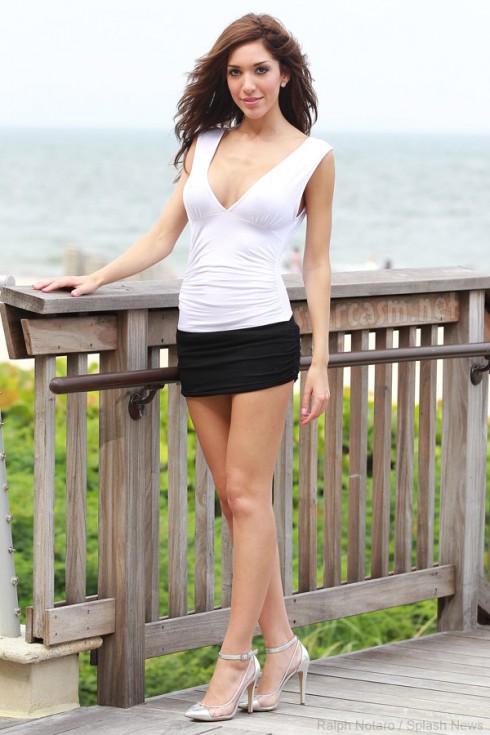 Former Teen Mom star turned adult film star Farrah Abraham continues to add to her daunting resume this weekend by hosting an awards show and posing for the cover of a rather, um, unique magazine. The fore-mentioned daunting resume has apparently been noticed by the folks at the EOTM (which stands for Entrepreneurs On The Move) Awards, because they have not only nominated Farrah for an award, they’ve invited her to host their awards ceremony tonight!

Farrah posted a keek video yesterday in which she talks excitedly about her cover photo shoot with Girls and Corpses magazine (seriously) as well as her hosting gig. Here’s the video followed by a transcription of what she says in the clip:

Hey Everyone. So, I’m in LA. The last time you saw me I was leaving my boo boo Sophia. And look at my shirt. Ooooo! That should give you a hint as to what photo shoot I had today. And it’s going to be amazing, and hopefully it will be one of the best covers of this magazine. So, hush until then, and you’ll see it this winter. Um, but tomorrow I’m excited to host my first ever awards show at the EOTM Awards — Entrepreneurs On The Move. And it is amazing, there are so many cool people! So I’ll see you then, LA. Love you!

Here’s Farrah in her Girls and Corpses tank top:

The EOTM Awards are scheduled to begin at 9PM PST I believe, but the only live coverage I could find was the EOTM Radio Station, which you can listen to HERE.

So what exactly are the EOTM Awards? Here’s a description from their Facebook page “About Me:”

On the EOTM Awards website, they introduce the show’s host with: “MTV’s Teen Mom, Entrepreneur, Best Selling Author, Maverick, Risk-taker​ Farrah Abraham.” And if you’re curious who the “so many cool people” are exactly, here’s a list:

(An earlier promotional video for the Awards lists Farrah’s Teen Mom cast mate Maci Bookout as one of the many celebrities who will be in attendance, but her name isn’t listed on anything more recent so I’m guessing that fell through. Maci has said nothing about it on Twitter this weekend and she doesn’t appear to be in California.)

As far as the Girls and Corpses magazine cover, Farrah Abraham will be joining other such notable celebabes as former adult film star Tera Patrick and Courtney Stodden. Here are a couple of past covers of Girls and Corpses (Including Courtney Stodden and “The Real Houseflies”) to give you a rough idea what we’re in store for with the Farrah Abraham cover: 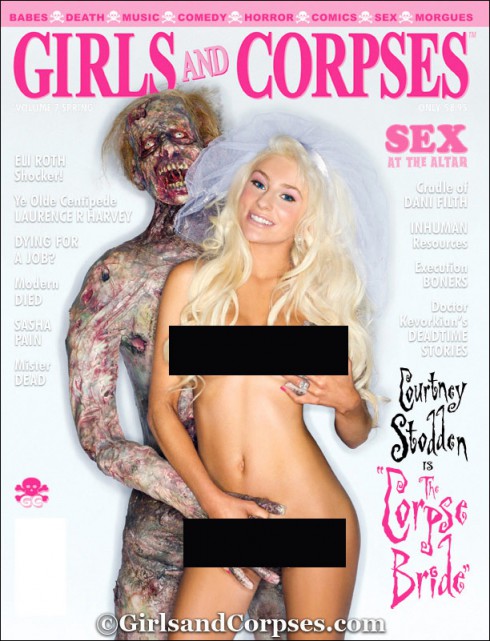 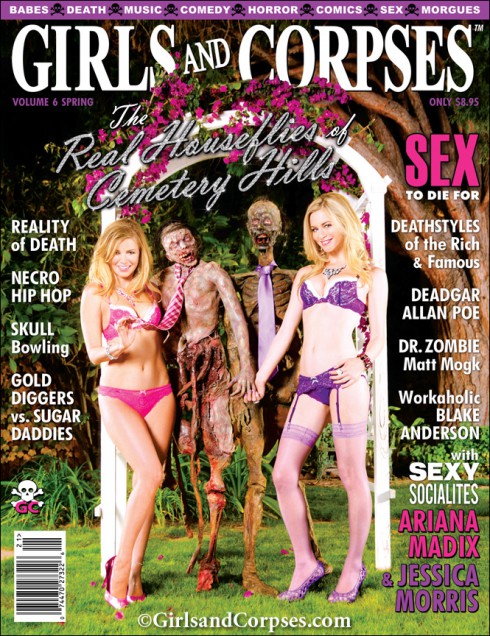 Let me go ahead and offer up my guess as to what the theme will be: Teen Mummy. You heard it here first.

UPDATE – Here is a behind-the-scenes clip of Farrah Abraham and Girls and Corpses “Deaditor In Chief” Robert Rhine during and just after the photo shoot:

After hosting the EOTM Awards, Farrah will hit the trail again on her summer barnstorming tour of America night clubs and strip clubs before jetting off to Johannesburg, South Africa in late September for the SEXPO Health, Sexuality & Lifestyle Expo — according to her web site.

Farrah Abraham criticizes ‘brothers’ and Kardashians in one swoop