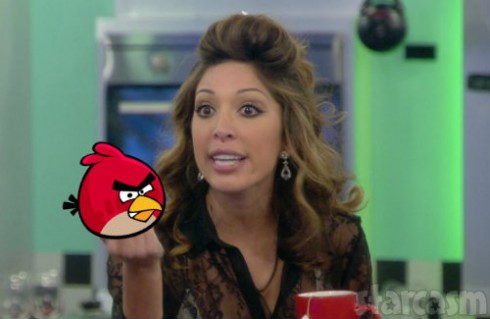 Farrah Abraham’s lasted in the Celebrity Big Brother UK house for nearly two weeks, despite being deemed one of the most unpopular contestants of all-time by British press. However, her run may be coming to an end after she threatened to kill the other participants.

During Monday night’s episode of the show, Farrah and English singer Natasha Hamilton got into a huge fight about rationing food. Before the argument came to blows, the Big Brother house called Farrah into the diary room to cool her jets for a bit — but that only seemed to increase her rage.

“I’m not even f**king wasting my energy to sit back up and down. You can fix my flip-flop, which I broke up coming in here,” Farrah said to the camera, according to The Daily Mail. When Big Brother explained why they called her into the room, Farrah continued, “What, because I was going to f**ing obliterate the scum of this house? I am straight-up going to kill everyone in this house. I’m sick of this negative bullsh*t when they’re the scum of the earth. Don’t f**king piss me off.”

By the next morning, Farrah finally calmed down a bit and was able to discuss the situation with Sherrie Hewson. But, of course, it was a typical Farrah-type apology.

“I’m going to just apologize because I felt like I was being pushed,” Farrah said, via OK! “I apologize for any of my… Not at you, at someone else. If you feel like my tone is off because you might feel there is a cultural connection.”

Celebrity Big Brother UK airs on Channel 5 in the UK. Farrah is safe for a few more days.