The most dramatic extended couples sleepover on TV comes back September 10 as Dr. Jenn Berman tries to work her relationship magic on a new batch of troubled celebrity pairings on Couples Therapy Season 5, and according to the preview trailer video released by VH1, “it’s the most volatile season of Couples Therapy yet!”

In case you missed it, the celebrity couples seeking Dr. Jenn’s help this time around include Jersey Shore‘s Deena Cortese and her boyfriend Chris Buckner, Big Brother‘s “Evel Dick” Donato and his girlfriend Stephanie Rogness-Fischer, adult film star Jenna Jameson and her porn-worthy-monickered beau John Wood, Naughty By Nature’s Anthony “Treach” Criss and his girlfriend Cicely Evans, and a fifth mystery couple that is believed to be The Bachelor‘s Juan Pablo Galavis and final rose winner Nikki Ferrell.

From the looks of things we’re going to see an emotional revelation from Evel Dick, which will probably shed some insight into what made him so “Evel,” a LOT of resistance and profanity from Jenna Jameson, and allegations of cheating hurled at Treach, which he adamantly denies. Should be cray-zay! (Something tells me this crew is going to wreak some havoc in the bashing therapy session.)

Couples Therapy Season 5 premieres on Wednesday, September 10 at 9/8c on VH1, which is one week after the much-anticipated Couples Therapy Reunion Special in which Farrah Abraham and Catelynn Lowell reconcile and apparently Courtney Stodden reveals she’s un-divorcing and remarrying her ex-husband Doug Hutchison.

I’ll leave you with Jenna Jameson either being angry at a producer, or else she is looking for some sort of three-way? 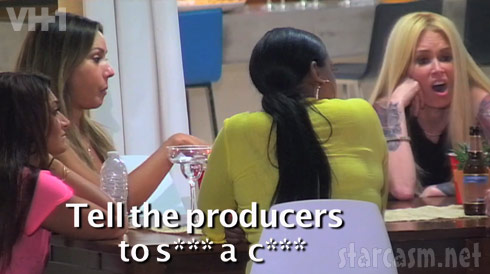