Joining the Mile High Club aboard a commercial flight usually requires a little planning and some discretion, but that was not the case for one couple who decided to throw caution to the wind and join the club from the comfort of their own seats!

Unfortunately for them, another couple enjoying the comfort of their own seats recorded the randy act on a cell phone. They sent the video clip to their daughter, Kiley Tully, who promptly posted the video to Twitter for all the world to see.

“My mom and dad were just trying to have a peaceful trip to Mexico and then they sent me this……..” Kiley captioned the clip: 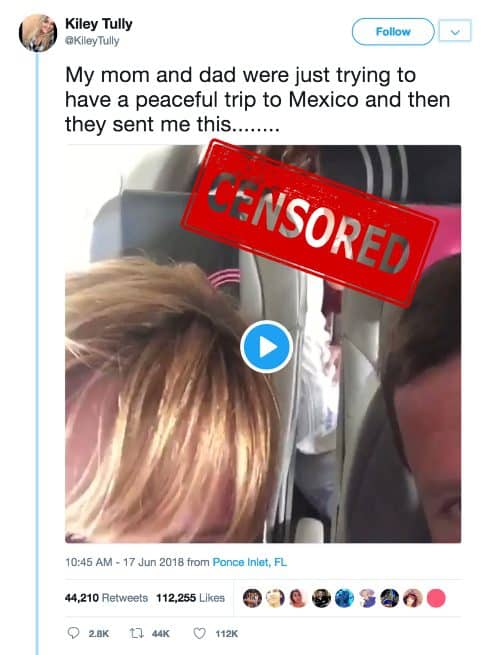 We can’t include the NSFWish (but fully clothed) video here — you’ll have to head over to Kiley’s Twitter to watch for yourself.

The incident took place on Silver Airways, a small airline based in Ft. Lauderdale. According to the Daily Mail, the carrier is looking into the incident.

“We are taking this very seriously and working to determine the legitimacy of the video and specific flight information,” explained Misty Stoller, Silver Airways Director of Communications.

While it may seem like fun and games for some, having sex on an aircraft can result in serious consequences. “You face indecent exposure charges, or potentially interfering with the flight crew, which has a maximum sentence of 20 years in prison,” Maxim explained back in 2015.

The video has inspired a bit of a debate over whether or not Kiley had the right to post the clip, essentially creating a sex tape that has been retweeted well over 100,000 times at the time of this post. Some are arguing that it was an intimate moment between two people who did not consent for this to be posted to social media. Others, argue the couple gave up their right to privacy when they decided to have sex in public on a commercial airplane.

(It should be pointed out that you cannot see the faces of either of the two lusty travelers.)