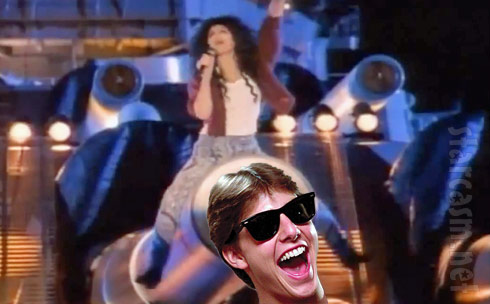 If Cher could turn back time one of the things she might do is bed Tom Cruise again!

The diva appeared on Watch What Happens Live last night and revealed to host Andy Cohen that ol’ Maverick was certainly a top gun. Cher and Cruise were an item back in the 80’s and Cher did some serious sharing about how much she enjoyed Cruise’s close company.

“It was pretty hot and heavy for a little minute. He’s a great guy. The person that I knew was a great and lovable guy,” She said. When she was later asked where he ranked on the Cher-bear list she added, “He was in the top five! I just had the greatest lovers ever.”

Here’s a clip of the two playing “Truth or Cher” (I sure do love me some Andy) as Cher breaks down her risky business when Tom was in cruise-control:

This isn’t the first time the living legend talked about Tom being able to make it rain man. In an interview with Oprah back in 2008 she said, “I was crazy about him… He was shy. He said he felt like such a boob in school and nobody talked to him. We went on a date once for dinner in a New York restaurant and the waitress was from his old school.”

When discussing Terrific Tom with Andy she made sure to mention, “He wasn’t a Scientologist then.”

Nicole Kidman said divorce from Tom Cruise left her depressed, but is now happier than ever

Who is Nazanin Boniadi, the actress who “won” Tom Cruise’s wife audition?