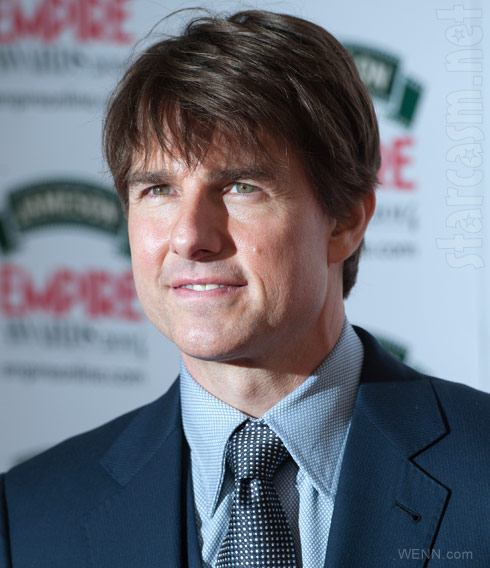 Tom Cruise was in attendance at the 2014 Jameson Empire Awards in London, England Sunday and the 51-year-old actor was sporting a rather old-school Bieberesque coiffure.

And speaking of Tom Cruise looking younger, he also answered questions about the rumored Top Gun 2 in a red carpet interview with Sky News!

SKY NEWS: I have to ask you about Top Gun 2. Jerry Bruckheimer says it’s closer. It’s taken 30 years — you’ve been trying to make it, how close are we to getting a Top Gun 2?

TOM CRUISE: You know, in the same way, it’s just Jerry and I talking about it. Nothing’s decided. It takes time.

SN: It must be close.

TC: I know. I’m working on the next Mission right now, so that’s kind of gotten my focus. We just finished Edge of Tomorrow and it’s coming out in a couple of months so I’m excited for audiences to see it.

SN: Is it frustrating not being able to make Top Gun 2, because 30 years go by and there must come a time where you say to yourself, ‘If it doesn’t happen soon it’s never going to happen.'”

TC: You know, with movies, they have a time, and when they’re ready to be made you go and make ’em. So I haven’t felt frustrated by it. But, if we can figure it out it would be something that I feel like we can make special for an audience. It would be fun to do.

SN: What are the stumbling blocks?

TC: You know, some movies I’ve worked on for years before they’ve been made, you know? It just takes time.

I assume in Top Gun 2 Tom Cruise will be taking on the roll of curmudgeonly ol’ flight instructor and we will be introduced to a new, sexy young Top Gunner. Who do you think should replace Tom Cruise as America’s sexiest fighter pilot? I’m gonna toss Garrett Hedlund’s name out there, although someone like Michael B. Jordan might put a nice spin on things! (Or I suppose they could guarantee a billion dollar gross, as well as an internet outrage nuclear bomb, by casting Justin Bieber in the role.)

Justin Bieber hopes Anne Frank would have been a Belieber

VIDEO Justin Bieber kisses man, then goes out of his way to assure us he’s “not gay”