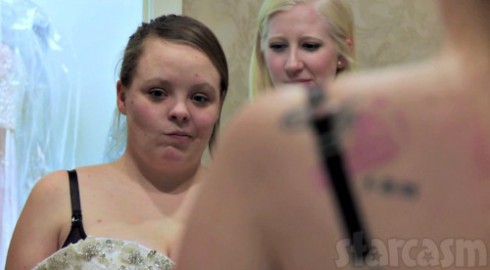 Major kudos to Teen Mom OG‘s Catelynn Lowell: When the new mom tried on the wedding gown she previously picked just two months after welcoming baby Nova, she kept her cool when the bridal shop attendant suggested she lose four dress sizes before walking down the aisle.

“I think that’s as far as we’re going to be able to get it to go down over your hips,” the attendant said during Catelynn’s fitting. “Like you said, you just had a baby two months ago… You’ll probably have to go down four sizes.”

Despite the less-than-positive news, Catelynn seemed to have an impressive attitude upon returning home to fiancé Tyler Baltierra.

“So, did it go worse or better than you expected?” Tyler asked. “Did it give you a good kind of idea…”

Catelynn said it was good because she now knows what she’s dealing with — even though it seemed a bit unfair that Tyler “can eat a bunch of junk food and now gain weight.” But, because she can’t go back and be born with his metabolism, Catelynn said she was hatching a plan to work out and lift weights.

The good news is that Catelynn and Tyler are still a few months away from their August wedding at a castle in Northern Michigan.

See more from the scene in tonight’s Teen Mom OG on MTV at 10/9c.